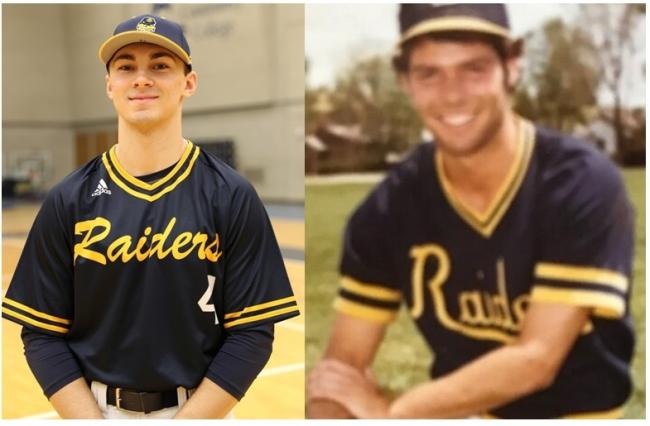 The GRCC team unveiled a new set of uniforms this year, including an alternate blue pullover jersey with blue and gold stripes on the sleeves and collar and “Raiders” in old-school gold script across the front.

It’s a look very similar to what Eddington wore when he played two seasons at GRJC for legendary coach Tom Hofmann. He was part of the team that placed sixth in the Junior College World Series and was an honorable mention All-American.

Eddington said his players suggested the throwback look for the alternate jerseys. The team’s main white jerseys feature the GRCC athletic font unveiled late last year. All the team’s uniforms are made by Adidas. The throwback jerseys are worn with caps adorned with the college’s historic Raider logo, designed in the 1950s.

“It was their idea,” Eddington said. “Our program has a lot of history and it’s a tribute to the former players and coaches. I want our players to respect the program and play with pride for their school.”

Player Brady Paganelli said he noticed one of the older jerseys hanging in the Gerald R. Ford Fieldhouse, and saw photos of Coach Eddington and Assistant Coach Mike Cupples wearing them.

“I thought they looked sweet,” he said. “Once we heard we could pick out the new jerseys, that’s what instantly popped into my mind. I think the guys like playing in them because they have a sweet look, and they also represent the winning tradition GRJC showed back when those jerseys were originally worn. Now they can be part of a new winning tradition we are trying to bring back to GRCC.”

“It’s appropriate the team chose to look back with the alternate jerseys,” Firn said. “GRCC has a proud athletic heritage. Coach Eddington is part of it, and now he gets to add to that legacy as a coach.”

Eddington’s MSU home run record still stands, and he remains among the leaders in several other categories. He was MSU’s team captain and was selected as a first-team Big 10 player and an All-American.

The team is 9-13 after a rough stretch at the start of the season on the road, but has rebounded and is 7-1 in conference play.