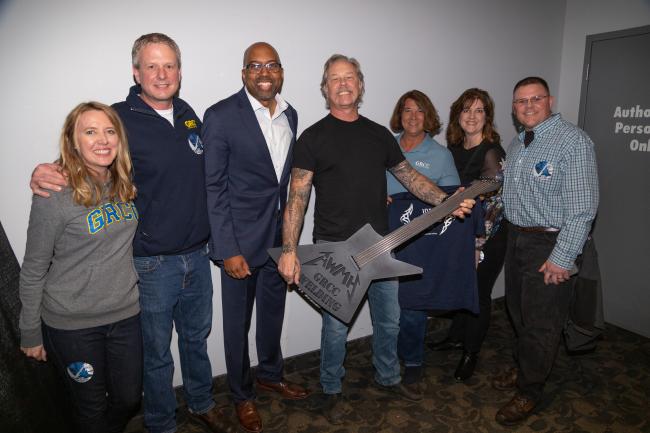 Metallica gave GRCC a $100,000 grant to provide more opportunities for nontraditional students to gain in-demand welding skills that will lead to rewarding jobs.

Pink and Julie Parks, GRCC’s executive director of Workforce Training, met with Hetfield prior to the legendary band’s Wednesday concert at the Van Andel Arena and presented gifts – including a decorative steel guitar crafted by welding professors.

Pink described Hetfield, a member of the Rock and Roll Hall of Fame, as a “genuine person” who was greatly interested in what GRCC was doing to create opportunities.

“He expressed a desire to see the funding from the band going toward programs that help people get skills they need to get good jobs,” Pink said. “He was very focused on the idea of helping people.”

GRCC is one of 10 colleges selected nationwide for the Metallica Scholars grant. The band's All Within My Hands Foundation teamed up with the American Association of Community Colleges on the project, aimed at providing workforce training for community college students and reinvesting in cities where the band has toured.

The college will use the funding to launch an intensive welding program targeted toward nontraditional students that takes less time to complete than traditional courses. It will also feature smaller class sizes with flexible scheduling options and career preparation assistance.

GRCC will partner with local employers so students can participate in site visits, employee panels and mentoring to help them determine if welding is a good fit for their career goals. Each student will participate in individualized career-preparation with GRCC to ensure they are job-ready upon completion of their welding license.

Welding professors John Doneth, Nick Pinckney and Nathan Haney appreciated the band’s support, and used their skills to turn 14-gauge sheet steel into a decorative guitar with the foundation’s logo and “GRCC WELDING” cut into the front.

Doneth said the project brings him full circle. “I used to go to welding school and listen to Metallica’s music. Now we made them something cool and are teaching welding,” he said.

Pink said Hetfield emerged from the band’s dressing room strumming the guitar with a big smile.

Band members are known to be fans of craft beer, collaborating with a California brewery to release Enter Night Pilsner in January. GRCC presented each of the band members with personalized mugs from GRCC’s Fountain Hill Brewery – allowing them a free pour when they visit the brewery or to remember GRCC fondly when at home or on the road.

Metallica established the All Within My Hands Foundation in 2017 to invest in the people and places that have supported the band. The foundation previously supported efforts to fight hunger and provide emergency community aid, and is expanding its mission to include support for career and technical education.

The foundation’s executive director has said one of the goals of the grant program is to "raise the awareness of the tremendous importance, value and impact of the education provided by our nation’s community college system.”

“The foundation and the band are thrilled by the quality of proposals we received from these colleges, and are excited to do our part to help educate students so that they have the skills and training necessary to find meaningful and well-paying jobs in their communities,” Edward Frank, the foundation's executive director, said when the grants were announced in December.

The American Association of Community Colleges is a Washington, D.C.-based organization that represents the nation’s 1,103 community colleges.