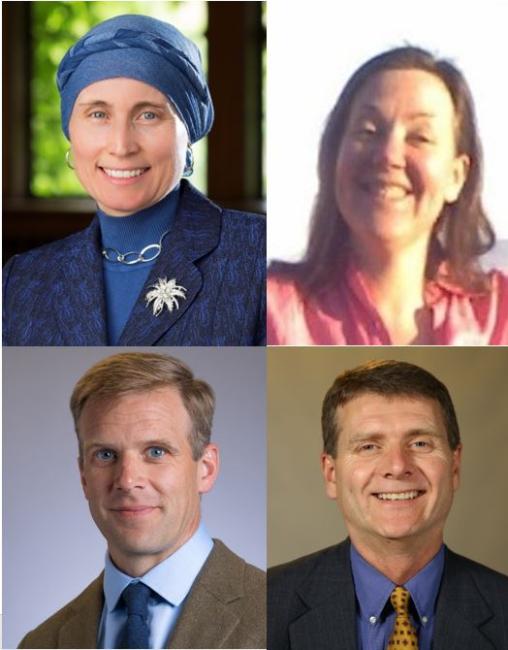 July 8, 2019 GRAND RAPIDS, Mich. — Grand Rapids Community College has selected four educators as finalists for the position of provost and executive vice president for academic and student affairs, with a public session scheduled for each candidate.

The provost is the college’s chief academic officer with major responsibilities for strategic planning and guiding all aspects of teaching and learning in support of student success. The provost also is charged with establishing GRCC’s academic vision in pursuit of its mission through the contributions of the deans, associate deans, faculty, staff, and their respective systems of support.

Mike Light, professor of American history, and Dr. Werner Absenger, program director for the Secchia Institute for Culinary Education, are guiding the search.

Candidates are expected to make a public presentation, each scheduled for 2:15-3:15 p.m. in the auditorium of the Wisner-Bottrall Applied Technology Center, 151 Fountain St. NE. Fathe is scheduled for July 15, with El-Sayed on July 16. Knetl is set for July 17, and Vargo is planned for July 22.

El-Sayed has been at Marygrove College since 2014, serving in administrative roles and as a professor of mechanical engineering. She was on the faculty at Kettering University in Flint for 18 years, serving in multiple leadership positions, including director of the Center for Excellence in Teaching and Learning, associate provost and associate vice president for academic affairs.

El-Sayed also has served in industry and government. She is a four-time gubernatorial appointee to the Michigan Truck Safety Commission and chaired the Michigan Department of State’s advisory committees for driver education and motorcycle safety — work that resulted in new legislation.

El-Sayed began her career as an engineer for General Motors Truck Group and has been recognized in higher education as both an ACE Fellow and an NLA Fellow. She also serves as vice president of the Bloomfield Hills Board of Education.

In addition to her work at Heritage, Fathe was dean of Arts and Sciences at Owens Community College in Perrysburg, Ohio; associate provost at George Mason University in Fairfax, Va.; and was on the physics faculty at Occidental College in Los Angeles.

She directed the Los Angeles Collaborative for Teacher Education, a five-year, $5.5 million project funded by the National Science Foundation focused on enhancing STEM preparation for future and current teachers.

Knetl served as Harper College’s associate provost for Academic Affairs, dean of Liberal Arts and founding associate dean of the Center for Adjunct Faculty Engagement before being named interim provost. He also served as assistant dean and director of Academic Arts at Moraine Valley Community College in Palos Hills, Ill.

At Harper, Knetl championed academic planning and pathways, built relationships with high school partners leading to better curricular alignment and increases in early college credit, and has served as co-leader of the Achieving the Dream initiative

Before his transition into administration, he was a faculty member for seven years in the theater department at Saint Mary’s University in Winona, Minn., serving as department chair for two years.

Knetl has a bachelor’s in theater from Saint Mary’s; a master’s in theater from Texas State University in San Marcos, Texas; and a doctorate in curriculum and instruction from Loyola University-Chicago. He completed the Aspen Presidential Fellowship Program for Community College Excellence in 2019.

He joined GRCC as a full-time faculty member in the Psychology Department in 2004. Prior to that, he was in the psychology department at the University of North Carolina in Greensboro. He spent 11 years in academic administration and has 10 years of experience as a faculty member serving undergraduate and graduate populations, including six years as a full-time community college classroom faculty member.

Vargo earned a bachelor’s degree in psychology at Grand Valley State University, and his master’s and doctoral degrees in clinical psychology from the University of Arkansas in Fayetteville. A clinical psychologist, he has worked in a variety of educational and clinical settings in the United States, Canada and other countries.