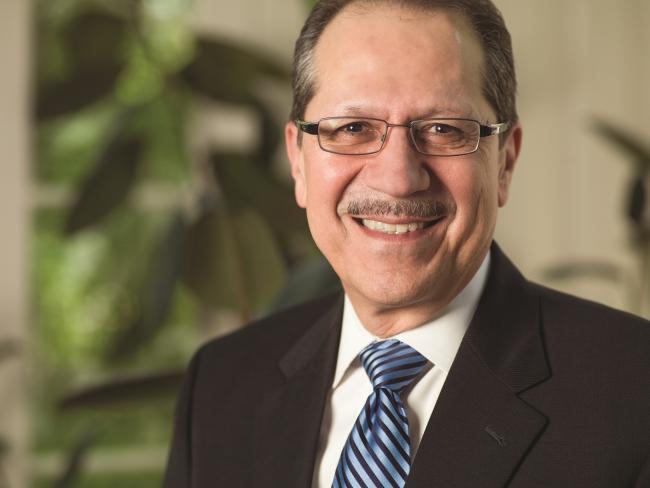 The board of trustees voted unanimously today to bestow the title on Olivarez, who also will be the keynote speaker at GRCC’s April 27 commencement.

“Dr. Olivarez worked tirelessly for GRCC students, making sure they are the focus of everything we do,” board Chairman David J. Koetje said. “He built partnerships throughout our community that led to more opportunities for our students and strengthened our region as a whole. Presenting Dr. Olivarez with the President Emeritus Award is a reflection of his impact and of the respect we have for him.”

Olivarez became the first Hispanic president of a Michigan college or university when he was tapped to lead GRCC in 1999. The son of migrant laborers, he has degrees from Aquinas College, Wayne State University and Michigan State University.

After working in Grand Rapids Public Schools for more than 20 years, Olivarez became GRCC's dean of Institutional Research in 1991. He was named the college's eighth president and is known for his efforts to develop community partnerships and boost minority enrollment so all West Michigan students have the best opportunities for a strong education.

“We are a better college today because of Dr. Olivarez’s leadership,” GRCC President Bill Pink said. “I continue to see his influence on how we work with the people we serve, and with each other. He brought people together and made sure that we are truly the community’s college. That’s a legacy that he can be proud of, and that we can celebrate with this honor.”

After retiring from GRCC in 2008, Olivarez became president and CEO of the Kalamazoo Community Foundation, guiding the organization through an economic downturn by developing staff and creating programs with a focus on sustainability. He became Aquinas' seventh president in 2011, working to increase academic and athletic opportunities for students. He retired from Aquinas last year.

Olivarez has served on many national and regional boards and committees, including the Van Andel Education Institute, First Steps Kent, the Council of Independent Colleges, Educational Testing Services, High Education Research & Development Institute as well as the National Institute for Literacy.

In 2013, GRCC trustees renamed Bostwick Commons, the courtyard connecting the Main and Student Center buildings, the Dr. Juan R. Olivarez Student Plaza, citing his vision that all students may find success in and out of the classroom. He is the third GRCC president to receive the President Emeritus Award, following Richard W. Calkins and Steven C. Ender.

Olivarez will deliver his keynote address to graduates during GRCC's commencement, which will take place at 7 p.m. April 27 in Ford Fieldhouse, 111 Lyon St. NE.