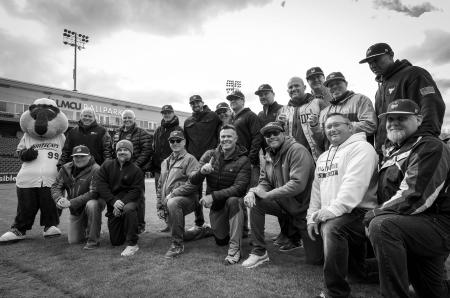 GRCC celebrated thrills from the past and present during a special game at LMCU Ballpark this past spring.

The Raiders faced off against Calvin University on April 19, tying in the first game and winning the second 8-0.

Helping to celebrate the current team’s accomplishments were about 20 players and coaches from GRCC’s NJCAA National Championship teams in 1996 and 1997. Led by Hall-of-Fame coach Doug Wabeke, these teams were the first from GRCC – in any sport – to win a national championship. Two players, Brad Block and Joe Trigg, were named All-Americans.

“Each world series, we swept 8-0, 8-0 each year, and it was just an awesome team,” former second baseman Trigg told FOX 17. “It was like even the infield practice, everything was like choreography. Everything was smooth and clean and the best baseball years of my life for sure.”