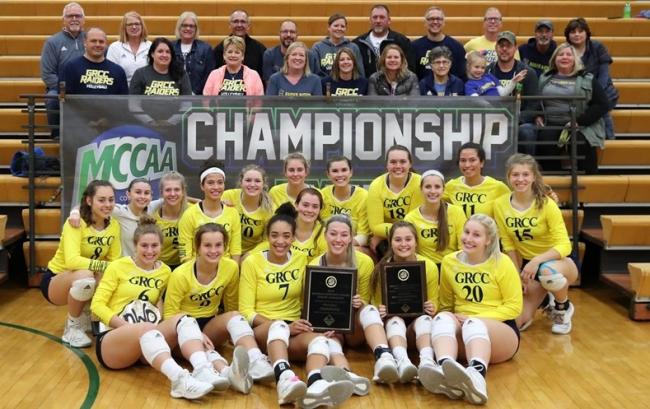 On Saturday afternoon, the No. 12-ranked Raiders earned their sixth MCCAA Championship in the past nine years after defeating Oakland Community and then Muskegon Community colleges.

The Conference Champion Raiders had to play Oakland in the first semifinal of the day.  OCC finished 2nd in the Eastern Conference and had already been swept by GRCC earlier in the season at the Raider Challenge. On Saturday, Oakland again proved to be no match for GRCC.  The Raiders hit over .320 in each set, totaling 41 kills with just 10 hitting errors, sweeping the East Side Raiders once again.

Outsides Kendra DeJonge and Danielle Johnston combined for more than half of the offense themselves. Johnston led the Raiders with 13 kills and hit a solid .417.  DeJonge, who had just three hitting errors the entire day, had nine kills and two aces.  Ally German and Breanna Wickerink each had four kills while combining for four blocks. Emma Pachulski came off the bench to connect on four of six attempts, including the set winners in the first two sets!

The Western Conference showed once again that it had the top two teams in the state, as Muskegon upended the Eastern Conference Champion Mott Community College in the second semifinal in four sets. That win set up the third straight MCCAA Championship between the two teams, and for the 9th straight time, the Raiders would send the Jayhawks back to Muskegon with a loss.

GRCC came out in dominating fashion to open the match, cruising to a 25-11 first set win.  The offense picked up where it left off in the last match, hitting .375 with 15 kills and just three errors, and even had three aces.  Johnston, who totaled 27 kills for the day, had five alone in the set, while DeJonge added three with two aces and a solo block.

The Jayhawks seemed to have control of the second set, leading by as much as six (15-9), but the Raiders clawed back, mostly due to the serving of freshman Jasmine Wellet. With the score 19-15 in favor of the 13th-ranked Jayhawks, Wellet got the call to serve, and six points later (including two aces), the Raiders found themselves with a 21-19 lead! Both teams traded points the next six serves, but after a Wickerink kill to make it 24-22, the Jayhawks hit it into the net and the Raiders completed the comeback. DeJonge totaled half of the Raiders' 16 kills in the set.

After numerous lead changes in the third set, the Jayhawks took the lead for good after a 5-1 run that made it 22-18.  A DeJonge kill got the Raiders to within one point at 23-24, but the Jayhawks would avoid the sweep with a kill of their own to take it 25-23. Nine Raider errors proved to be the biggest factor. They only hit .140 as a team and had six hitting errors, two reception errors, and one service error.

Both teams exchanged many leads in the fourth set as well, but this time it was the Raiders who rallied late, going on a 5-0 run to lead for good 20-16. The Jayhawks (who snapped a nine-match win streak) make you work for every single point and that's exactly what the Raiders had to do, earning the final four points, a Johnston kill, back-to-back Wickerink kills and a Jamie Wellet ace to win it all!

Wickerink saved her best for last with five of her 11 total kills in the decisive set.  DeJonge, the 2017 All-American, put up one of her best performances of the season, hitting .375 with 20 kills and just two errors, to go with 19 digs, three blocks and two aces.  Johnston contributed with 14 kills, 12 digs, three blocks and two aces.  German hit .500 with four kills and a team high four blocks, while her high school teammate, Kelsie Schultz added a team best 21 digs.

The Raiders will have a few days before the NJCAA Regionals, which begin Nov. 1 at the St. Clair County Community College fieldhouse in Port Huron.  GRCC will be the No. 1 seed, earning a first round bye, and will play the winner of the Lansing-Glen Oaks match at 8 p.m.