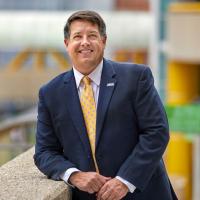 Dave Murray is an award-winning communications professional and journalist, leading the team telling the story of how a Grand Rapids Community College education can transform lives, and how GRCC is a vital part of a strong West Michigan.

Murray was named GRCC communications director in March 2018 after more than 30 years in media and state government.

He was a deputy director in the Michigan Department of Talent and Economic Development, coordinating communications for four state agencies. Murray worked on efforts to improve education and build a talented workforce, including the Career Pathways Alliance, Going PRO and the Marshall Plan for Talent.

Murray worked as a reporter and editor for MLive, The Grand Rapids Press and The Flint Journal in Michigan, covering education and the Legislature. He appeared on CNN and C-SPAN to discuss the 2012 election and was a regular panelist on WGVU's "West Michigan Week" program. Murray covered education and local governments for The Bridgeport Post and Telegram in Connecticut.

He was elected in 2018 to serve on the West Michigan Public Relations Society of America's board of directors.

Murray is a 1986 graduate of the University of Missouri School of Journalism and a 1984 graduate of Nassau Community College in New York.