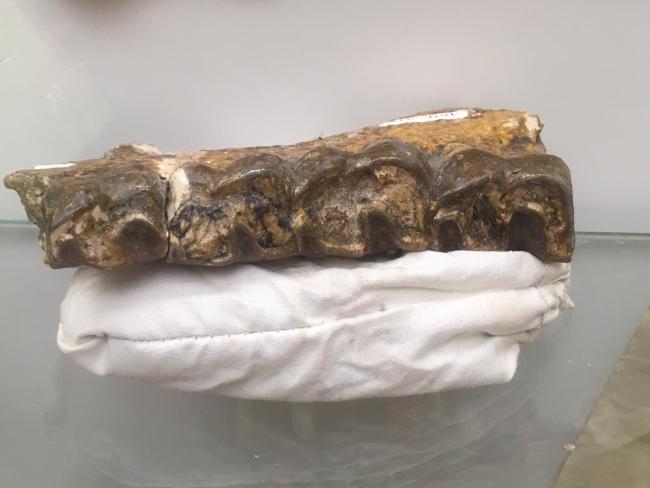 Sept. 5, 2019 GRAND RAPIDS, Mich. — Grand Rapids Community College has never before had a student asked to do a presentation for the Geological Society of America’s annual meeting. But this year, three GRCC students -- and one alumnus -- have been invited to share their work at the national event.

The conference, which will be held Sept. 22 to 25 in Phoenix, is one of the largest gatherings of geoscientists in the world, with thousands attending from more than 50 countries.

“GSA is an amazing opportunity for our students to not only learn about the latest and greatest geology research, but they can connect with peers and even future employers,” said professor Tari Mattox. “We are excited for the geology community to get a glimpse of our awesome and talented students and their work.”

Two of the students, Maegan Bouwens and Madison Jones, were asked to present the results of the four weeks they spent studying 34-million to 56-million-year-old igneous rocks in El Paso this summer through a fully funded research experience at the University of Texas-El Paso. Bouwens and Jones were among only seven students selected nationwide for the project, a collaboration between the university, El Paso Community College and the National Science Foundation.

“It was exciting to have the opportunity to conduct my own research as a community college student,” said Jones, who plans to eventually pursue a bachelor’s degree at Grand Valley State University after finishing her associate degree in geology. “I loved meeting other geology students and bonding with them over the course of a month.”

Student Ryleigh Landstra was invited to join Mattox and John VanRegenmorter, of the Physical Sciences Department, to discuss GRCC’s efforts to reorganize and catalog its fossils, which resulted in the discovery of many specimens from the famous collector Charles H. Sternberg and his three sons.

Sternberg is a big name in the paleo field, so the GRCC collection is an important discovery, Landstra said, adding that he, his father, his brothers and his sons were amateur fossil collectors in the early 1900s.

“Though we weren’t able to conclusively determine how and why the collection ended up at GRCC, our best guess is that his son was trying to sell off old specimens they had kept around, and GRCC was one of the buyers,” said Landstra, who is considering studying hydrogeology at GVSU or Eastern Michigan University after earning her associate degree.

Alumnus Michael Coluzzi, who graduated from Ferris State University this past spring with a bachelor’s in digital animation and game design, worked with Mattox and FSU professor Jacob Pollak and students Logan Brown, Dominic Modderman and Jacob Spagnuolo in creating a virtual reality field trip for geology students.

Mattox said the virtual reality project is the result of initiative, creativity and hard work by GRCC and FSU students.

“The impetus for the project was the desire to increase accessibility to classic geologic sites for our students,” she said. “This project has been an excellent example of how collaboration with our partners can bring innovation into the classroom.”