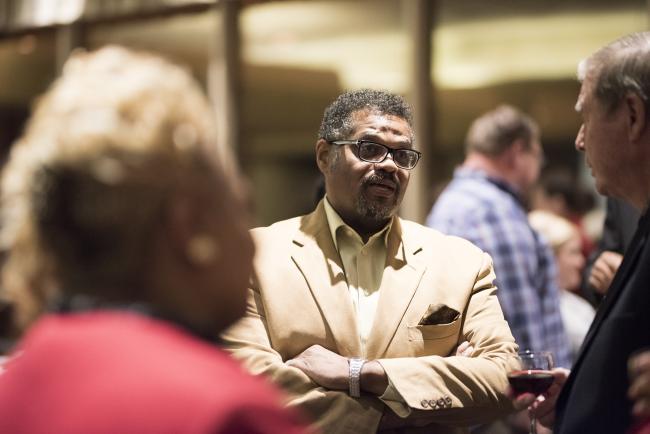 Feb. 24, 2020 GRAND RAPIDS, Mich. -- The Rev. Nathaniel Moody, a Grand Rapids Junior College alumnus who has devoted much of his time and energy to public service, was saluted as the 2020 GIANT Among Giants during a ceremony on Saturday.

Moody is pastor at Brown-Hutcherson Ministries, represents Grand Rapids’ Third Ward on the City Commission, and is one of 15 community leaders and students honored.

He is a former member of the GRCC Foundation board of directors and has served on the Grand Rapids Board of Education, the city’s Police Chief Advisory Committee. He serves on the Children’s Advocacy Council, the Interdenominational Ministerial Alliance, the Grand Rapids Area Association of Pastors and many other boards and committees.

“Rev. Moody has devoted his life to helping people in our city, especially those facing great challenges, through his work and volunteer efforts,” said Jennifer E. Smith, associate director of GRCC’s Office of Diversity, Equity and Inclusion and chairwoman of the 2020 GIANT Awards Committee. “He is truly a giant in our community, and an inspiration to many people.”

GRCC since 1983 has presented the GIANT Awards, recognizing African-American individuals or organizations for their exceptional contributions shaping the history and quality of life of the Grand Rapids area. Each award is named after a local person who has demonstrated excellence and serves as a perpetual memorial to those notable contributions.

Honorees have made meaningful contributions to Grand Rapids in a variety of areas, including justice, education, religion, medicine, humanities, business and labor.

Others saluted with GIANT Awards Saturday are:

This year’s honorees are:

The Junior Giants Award, named in honor of GIANT founders Dr. Patricia Pulliam and Cedric Ward, were presented to students of African-American heritage who have demonstrated leadership, community involvement and impact. Alexandria Vaughn-Earvin, 17, a senior at Forest Hills Central High School, and Brandon J. Fuller, 22, a senior at Hope College, received the honors.