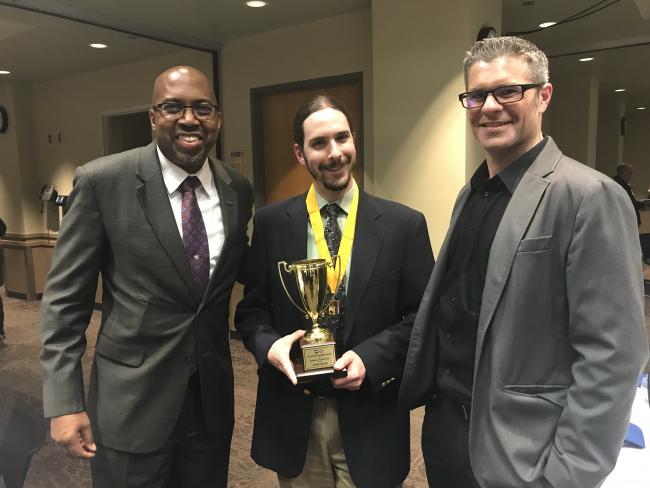 Daniel Cruzan received this year's award, which goes to the Delta Pi Alpha student with the highest cumulative GPA and the greatest number of honor points.

“When an industry partner, US Signal, came to us looking for internship candidates, and Daniel took the initiative to apply, I was delighted to recommend him,” CIS professor Andrew Rozema said. “He’s been over there learning about their networks in the real world this semester.”

As part of his coursework, Cruzan took four classes through GRCC’s partnership with Cisco Networking Academy and then passed a rigorous exam to become a Cisco Certified Network Associate. This spring, he will receive an Associate of Applied Arts and Science degree and will work toward a bachelor’s degree at Ferris State University.

Cruzan said his pathway to success was longer and more challenging than expected. He worked in a factory after losing his father to cancer.

“I was doing a grind, working 40 to 60 hours a week, and I was using that time to recover and save up,” Cruzan said. “I had no idea when I quit my job and started to go to college that I’d do so well or what I was capable of. I’m so thankful to everyone here for bringing me into your lives.”

The Arthur Andrews Award is given in memory of Grand Rapids Junior College's second president.

"This award recognizes students’ outstanding academic achievement and personal investment in their academic success,” said Tina Hoxie, associate provost and dean of Student Affairs. “It reflects the value that Arthur Andrews and GRCC have always placed on academic excellence.”

While the Andrews Award recognizes the student with the highest GPA, being a member of Delta Pi Alpha is itself an honor. That recognition goes only to students with excellent academic achievements from the top 5 percent of the graduating class. This year, 80 students were inducted into Delta Pi Alpha.