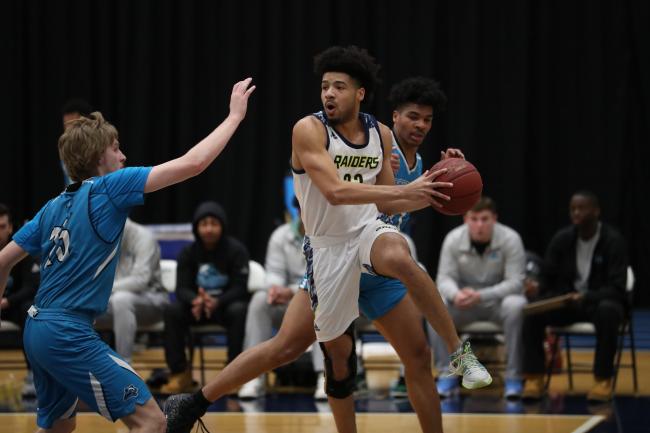 GRCC’s teams will be joined by the best community college basketball teams in the region at the tournament, bringing thousands of student-athletes, staff and spectators to the city.

The tournament is scheduled to be at the Gerald R. Ford Fieldhouse on March 5 through 7. The event will determine which men’s and women’s basketball teams advance to the NJCAA national championships.

The GRCC women's basketball team earned its place by beating Kellogg Community College at the Ford Fieldhouse on Tuesday, winning 68-60. The women will next play against the No. 1 seed, Muskegon Community College, on Thursday at 3 p.m.

The men’s team topped Mid-Michigan College on Tuesday with a 98-87 victory. The team will face No. 2 seed Ancilla Community College at 1 p.m. on Friday.

“We’re excited to have our GRCC teams competing in the tournament here, but we’re also thrilled our fans will enjoy the top talent in the state,” Athletic Director Bill Firn said. “This also is a great opportunity for high school athletes from across the region to come and see athletics at the community college level.”

Firn said hosting an event of this size can only happen with the support of community partners, and he’s glad visitors will get the chance to see GRCC, but also West Michigan as a whole.

The NJCAA, the governing body for community college sports, and GRCC hosted the Region XII Championship tournament last year as well, bringing men’s and women’s teams from Michigan and Indiana to compete.

Region XII will be sending six teams -- three men’s teams and three women’s teams -- to the national championships. GRCC will be hosting four of those six semifinal and finals matches with all participants coming from the Michigan Community College Athletic Association. The MCCAA West represents Great Lakes District-West while the MCCAA East represents Great Lakes District-East.

Tickets may be purchased at the Ford Fieldhouse on the day of the event, and cost $8 per person per day with children age nine and under admitted without charge.

The selection came as a result of a partnership between GRCC and the West Michigan Sports Commission, which touted the 2018 renovations of Ford Fieldhouse and Gordon Hunsberger Arena along with the region’s accessibility, affordability and attractions. The commission worked with local hotels to offer discounted rates and is providing other services to visiting teams, families and Region XII staff.

Additional information about the tournament is at: www.grccraiders.com.