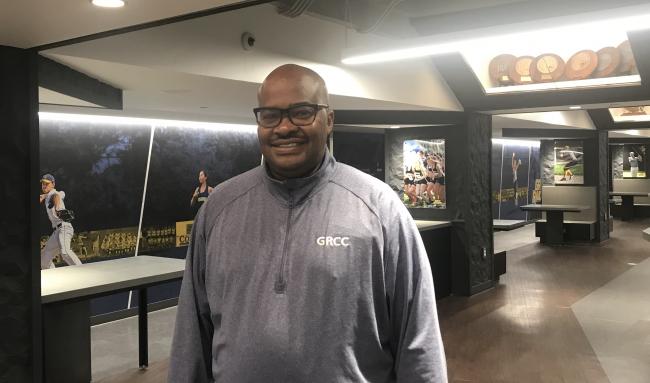 Oct. 16, 2020, GRAND RAPIDS, Mich. -- David Selmon, a veteran educator and one of the most successful coaches in Grand Rapids Community College history, has been named a trustee with the Grand Rapids Sports Hall of Fame.

The Hall of Fame honors prominent West Michigan athletes and those who have greatly contributed to sports on a local, state or national level.

“David is a perfect fit,” Hall of Fame director Mark Kimball said. “He is a man of character and passion for sports, has been a part of the community for over 30 years and has been heavily involved in local sports as a coach and school administrator. He’s also a fan of our local athletes and has a wealth of knowledge.”

People enshrined in the hall – including GRCC coaching legend Gene Paxton – are honored with plaques and two large-screen TouchWall displays at Van Andel Arena. The Hall of Fame also presents annual events in support of local youth organizations and charities.

Selmon is GRCC’s associate dean of Student Affairs and is serving as interim athletic director.

“I’ve been fortunate, even lucky, with the chances and opportunities I’ve had and the recognition I have received,” he said. “I love doing new things and having new challenges. This will be a new chapter in my life, and I’m happy to feel relevant in the local sports community.”

The Mansfield, Ohio, native came to Grand Rapids in 1984 to play basketball at what was then Grand Rapids Junior College. He played for Paxton and averaged 16 points and 7 assists for his two-year career, in which the Raiders were 52-15 and won a conference championship.

Selmon later became GRCC’s basketball coach, compiling a 416-136 record over 20 years – a .751 winning percentage. He was named a conference coach of the year seven times. He was national Junior College Coach of the Year in 1995, when the Raiders reached the NJCAA Division II National Championship game, losing by one point.

As a coach, Selmon wanted his students to be successful off the court as well, and the GRCC basketball team had some of the highest graduation rates in the state during his tenure.

In his administrative roles at GRCC, he works closely with districts across West Michigan to help attract and prepare students for college.

As a Hall of Fame trustee, Selmon said he will consider nominees fairly and will look at their character.

“That’s what I always try to do,” he said. “I have a lot of respect for the other trustees and look forward to working with them. I’m still a big-time fan. I love going to games. I can be there eight hours and it feels like two.”