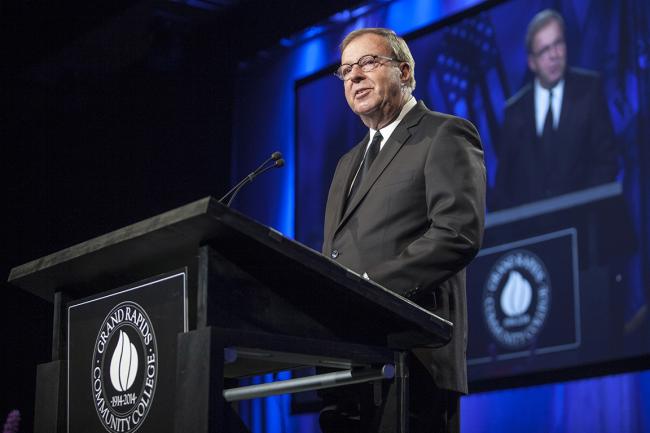 But in the 1960s, Custer was a first-generation student at Grand Rapids Junior College. His father’s grocery store had been forced to close, and he was happy that he could afford GRJC tuition. In 1967, he transferred his GRJC credits to Western Michigan University, where he earned a bachelor’s degree.

The CEO and founder of Custer Inc. shares his story with almost everyone he encounters, saying, “If it wasn’t for GRJC, my life would be very different from what it is today.”

Custer has dedicated his time and abilities to ensuring that current Grand Rapids Community College students get the opportunities that changed his life, and a national organization is recognizing his commitment.

The American Association of Community Colleges has named Custer one of just four 2020 Outstanding Alumni Award recipients from among 600 nominations. AACC President Walter G. Bumphus notes that the recipients -- like each of the 12 million students served by community colleges across the United States -- are an example of hard work and perseverance.

“I’m pleased we are able to honor just a few of the remarkable individuals who benefited from a community college education and have not only gone on to have successful careers, but also -- and more importantly -- have made a lasting and positive impact on their communities,” Bumphus said.

“Dave truly has dedicated his entire life to giving back to Grand Rapids Community College -- the college that gave him his start,” said Mullins, who nominated him for the award.

Custer became a member of the foundation’s board of directors in 1989 and immediately joined efforts that led Kent County voters to redistrict GRJC into the independent, standalone Grand Rapids Community College. In 2008, he was named board chair -- the first time this leadership position was held by someone other than the college president. He has served as chair of the fundraising committee for 30 years and most recently as co-chair of GRCC’s A Broader Vision capital campaign.

Dr. Jim Buzzitta, current board chair, notes that the foundation’s growth during Custer’s tenure includes a historic milestone: In 2017, more than $1 million in scholarships were awarded.

“Dave has an entrepreneurial spirit that has proven to be such a tremendous asset to the GRCC Foundation,” Buzzitta said. “He pushes us to think innovatively, and his love for his alma mater is evident in all that he does.”

Custer and the other award recipients will be honored at a March 30 ceremony during the AACC’s annual convention on March 30 in National Harbor, Md. The other recipients are: