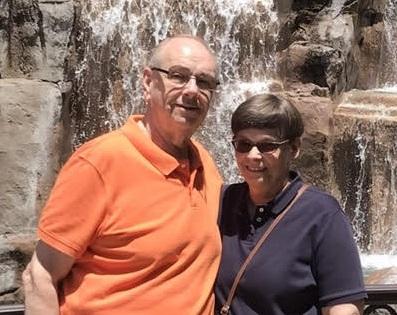 Jerry and Jan Benham will be celebrated during a virtual event from 4-5 p.m. May 28 on YouTube. Reservations can be made online at grcc.edu/benhamevent.

“That is 41 years of giving consecutively to support our students’ needs and removing financial barriers for students,” Mullins said. “There is not a single individual donor within our organization who has done this longer. That is why we are proud to recognize Jerry and Jan as the first recipients of the Armen Oumedian Consecutive Giving Award.”

Jerry Benham started work at what was then Grand Rapids Junior College in 1980 as the culinary arts supply room clerk. While he officially retired in 2001 as the food service director, he returned to campus that same year to work part time for the GRCC bookstore before retiring as its senior accounting clerk in 2011.

The Benhams received GRCC’s Excellence in Education Award in 1999. Their legacy also includes the Jerry Benham Award, which goes to a GRCC employee who has demonstrated outstanding involvement in student activities, and the Benham Service and Civic Engagement Award, which recognizes a student leader’s accomplishments with a stipend. They also provide funds for the student food bank.

“We became regular contributors when the Million Dollar Faculty Scholarship was created, and later, after receiving the Excellence in Education Award, we created our own scholarship focused on service-learning activities,” Jerry Benham said. “Two of our daughters participated in service-learning trips, and our scholarship provided a way for other students to fund their trips as well.”

The Armen Oumedian Consecutive Giving Award is named for GRJC alumnus Armen Oumedian. Oumedian, who passed away in 2018, created several scholarships through the GRCC Foundation, including opportunities for first-generation students and those going into healthcare. GRCC's Armen Awards, which were held from 2012 to 2016, reflected his commitment to innovative thinking. The awards were later renamed the Armen Innovation Grants.

Oumedian, who was named GRCC’s Distinguished Alumnus in 1996, worked for General Motors for 10 years and then worked for 32 years at Rapistan Inc., retiring as a senior vice president in 2000.

“Armen Oumedian and his family understood the importance of a college education, and dedicated significant resources to ensuring student success by removing financial barriers for them,” Mullins said. “The Oumedian family’s dedication to the success of GRCC students will be felt for years and years to come, and we are proud to honor that legacy by naming this award in his memory.”

Jerry Benham said the award is an unexpected honor.

“Never have we considered how long we have been contributing, as it is just something that we do automatically,” he said. “But it is an honor for us to be recognized for our continued commitment to GRCC students.”