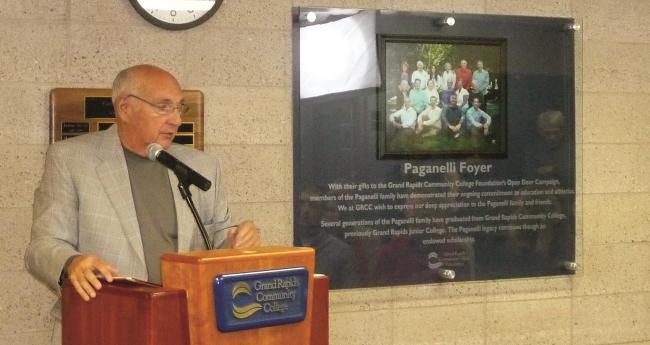 May 21, 2019 GRAND RAPIDS, Mich. — The students who received scholarships from Carl Paganelli Sr. became more than athletes -- they became family.

He attended what was then Grand Rapids Junior College from 1954 to 1955, and spent 40 years as a football official and mentor to officials, working with the United States Football League, the World Football League and the Arena Football League. He was inducted into the Grand Rapids Sports Hall of Fame as an individual in 2008, and again with his sons in 2018.

“Carl Paganelli Sr. was an incredibly strong supporter of GRCC in his words and deeds,” GRCC President Bill Pink said.

“He is a legend in the world of athletic officiating and proudly remembered how Grand Rapids Junior College prepared him to be successful. Generations of Paganellis have followed in his footsteps at GRCC, and the family’s support for our student-athletes through scholarships and at the Ford Fieldhouse project ensures Carl’s legacy will be felt for decades to come.”

“Carl Paganelli Sr. cared deeply about students and their success,” said Kathryn K. Mullins, vice president for College Advancement and executive director of the GRCC Foundation. “The support was very personal for him and his family. They knew the obstacles student-athletes face. They helped students financially through scholarships and helped us improve our facilities so students had better places to study, train and perform.”

The Paganelli Family Scholarship annually awards $1,000 to a GRCC student-athlete.

“Family is very important for the Paganellis, and they considered GRCC student-athletes to be part of their family,” said Tina Hoxie, associate provost and dean of Student Affairs. “Carl Paganelli was generous and passionate about supporting students, and he got to know each of the students who received the family scholarships and followed their success.”

At the foyer dedication in 2013, Carl Paganelli Sr. said he looked forward to hearing from recipients about their successes.

“The people who receive these scholarships, we want them to be part of our family forever,” he said. “And after you get to be a certain age, you can start your own scholarship and you can take care of the people who follow you.”

“With so many Paganellis coming through GRCC, it seemed fitting to give back to the college,” Mr. Paganelli said in a 2016 interview. “GRCC does so much for the area, and students get a good solid educational foundation.”