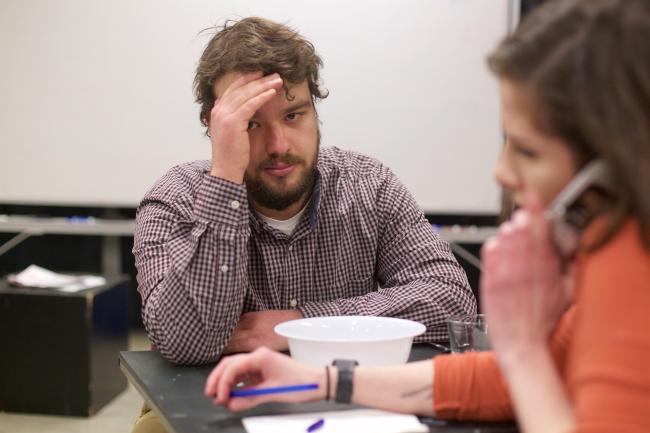 March 16, 2018 GRAND RAPIDS, Mich. — The GRCC Players will look at the need to connect in a technologically obsessed world in "Dead Man's Cell Phone" by Sarah Ruhl.

Theater faculty member Tom Kaechele will direct the play, which will be presented at 8 p.m. March 29 to 31 at GRCC's Spectrum Theater, 160 Fountain St. NE.

Ruhl, a MacArthur Fellow and Pulitzer Prize finalist, has set her comedy in a quiet cafe -- with an incessantly ringing cell phone -- where a woman is forced to confront her assumptions about morality, redemption and technology.

Kaechele said the play presents unique challenges for the cast as well as the set and lighting designers.

"The characters in this piece have a rather loopy or mysterious quality to them, and that forces the actors to look beyond what they would see as 'typical' reactions to the situations, and instead find ways to react more imaginatively," he said. "The designers then have to create that loopy world within which those character exist.  We're enjoying the challenge!"

In addition to the performances on March 29 to 31, the final dress rehearsal -- at 8 p.m. March 28 -- will also be open to the public; tickets will be available at the door.

Tickets for all the shows are $5 for GRCC students, $8 for other area students and GRCC faculty and staff, and $12 for the public. The play contains graphic language and strong content. Call (616) 234-3946 for tickets and more information.