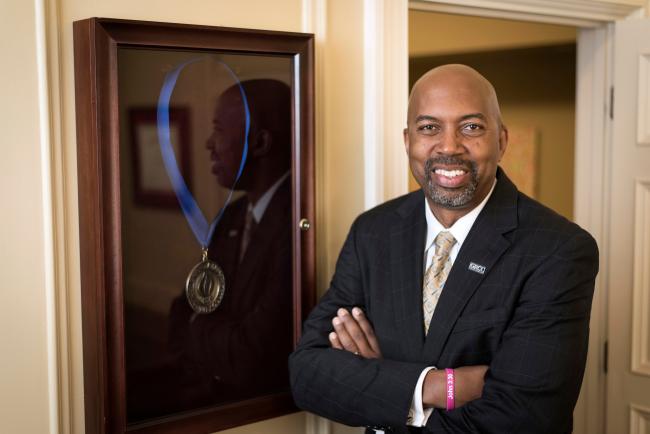 Pink joins 43 other college presidents from across the nation on the board and will provide input into the organization’s strategic plan, priorities, and direction.

Advisory Board members advocate for Phi Theta Kappa, its members, and its mission; serve as liaisons between PTK headquarters and the college leaders in their states; and advise the Society’s president and CEO and other senior leaders.

“Phi Theta Kappa does a tremendous job supporting students striving to reach their potential,” Pink said. “It’s important for colleges to create opportunities and have high expectations, but also creating an environment where students are supported and can thrive. PTK is an important part of that environment.”

Phi Theta Kappa is the premier honor society recognizing the academic achievement of students at associate degree-granting colleges and helping them to grow as scholars and leaders. The organization is made up of more than 3.5 million members and nearly 1,300 chapters in 11 nations, with approximately 240,000 active members in the nation’s colleges.

Phi Theta Kappa goes beyond recognition to serve as a pathway to student success and completion by providing scholarships and opportunities to its members for individual growth and development — work that would not be possible without the support of college presidents like Pink. The Presidential Advisory Board was established in 2015.

Pink earlier in February was among 28 college presidents nationwide receiving a Paragon President Award from the honor society.

The awards are given to new college presidents who have shown strong support of student success by recognizing academic achievement, leadership, and service among high-achieving students at their college. Pink was among 500 presidents who were eligible.