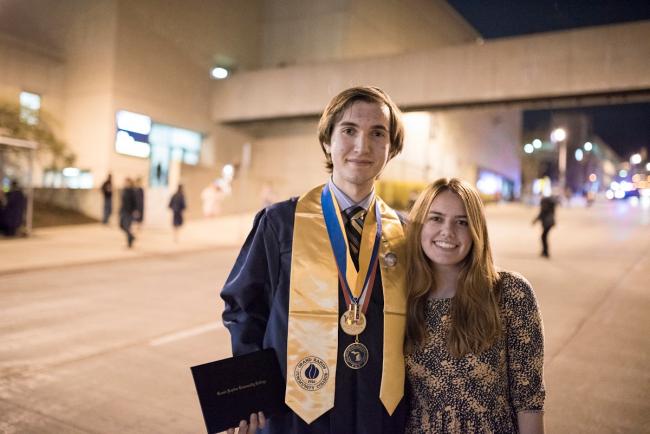 Marcus Barissi was an honors student and athlete from middle school on until chronic medical problems left him behind in the high school classroom his freshman year. His frustration led him to eventually drop out and get his GED diploma. He admits that enrolling at GRCC wasn't his first choice.

"When I started at GRCC, I didn’t want to accept the fact I couldn't attend my dream school right away, so I chose to sulk around and feel sorry for myself," he said.

But he decided that he didn't want to waste any more time and got involved. He made friends in Phi Theta Kappa, the international honor society for two-year colleges, and as a member of GRCC's Student Alliance. He attended local, regional and national conferences and worked on a college-wide suicide prevention project.

His hard work in the classroom led to success that built his confidence. He received the Cedric and Sandy Ward Leadership Award and was named Outstanding Biology Student for 2017-2018 and was a member of the All-Michigan Academic Team. This spring, he was one of 89 students inducted into Delta Pi Alpha, recognition goes only to the top 5 percent of the graduating class.

"Academically, I was completely surprised by the rigor of GRCC courses," Barissi said. "After two years and 80 credits of challenging courses, I feel much more prepared for the next chapter of my life. All my professors have made me feel included and wanted."

With what he's learned from professor Greg Forbes, in the Biological Sciences Department, he feels ready to transfer to the University of Michigan.

"Without him, I don’t believe I would have been as prepared for the rigor of my biology degree, let alone my medical degree," Barissi said. "Relationships such as these have redefined my understanding of how a student interacts with an instructor. Instead of looking down and trying to ignore your instructor, which is what I consistently did before, I've discovered it is important to create true friendships, potentially long-lasting ones, that can benefit you in the future."

Forbes said Barissi is not only intelligent and motivated but also courteous and supportive of his fellow students.

"Marcus is a model student whom other students clearly recognize as worth emulating," Forbes said. "He is destined to make this world a better place to live.

Barissi will receive an Associate of Science at GRCC's commencement, which starts at 7 p.m. April 28 at Ford Fieldhouse, 111 Lyon St. NE.