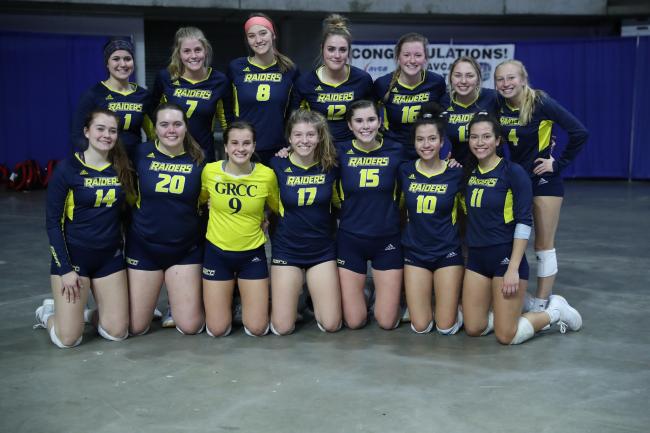 The 2019 finish is second only to the 2012 National Championship. The team has finished sixth twice, including last year. The team has qualified for the National Tournament 10 times since Coach Chip Will took the helm in 2007.

The Raiders, seeded 10th in the tournament, squared off Thursday in the first-round match against seventh-seeded Northeast Community College of Nebraska.  The Raiders got off to a slow start, trailing by as many as seven points, but responded with a 9-2 run to tie it all up in the opening set.

Both teams traded leads, but the Raiders prevailed after sophomore Dani Johnston's sixth of kill of the set, 25-23.  Northeast had the lead briefly in the beginning of the second set, but the Raiders would power to a 25-18 win.  In the third, the Raiders jumped out to a 7-1 lead, never looked back and completed the sweep 25-23.

The Raiders’ opening-round victory set up a Thursday night match against the No. 2-ranked Coffeyville Community College Red Ravens. Coffeyville has won back-to-back championships, and lost just twice this season. GRCC was defeated in three games, one a 29-27 thriller.

Johnston, the All-Region outside, led the team in points scored, with 10 kills, one ace and one solo block.  Lauren Jonker had 5 kills and hit .714 while Jasmine Wellet had four kills and a team best nine digs.

Friday afternoon the Raiders matched up with friendly foe McHenry County College of Illinois in the consolation bracket. McHenry, seeded 11th, upset their first-round opponent as well before falling to the eventual national champion Scottsdale Artichokes.  In a tight match, the Raiders would sweep the McHenry Scots 25-20, 25-20, 26-24 to advance to Saturday's fifth-place match.

Johnston, named to the All-Tournament team, led the team for the third straight match with 14 kills, hitting .270 and picked up three aces.  All-Conference setter Jamie Wellet had a team high 19 assists, five aces, ten digs and even had three kills. Mykayla Vallad led the team with 19 digs.

Playing for fifth place on Saturday, the Raiders challenged third-ranked Fort Scott Community College, which finished runner-up to Coffeyville in what might be the toughest league in the nation, the Kansas Jayhawk Community College Conference.

The underdog Raiders came back from a 2-1 deficit to win in five sets. GRCC got huge contributions from All-Conference setter/right side Jamie Rozell, who finished with seven kills, a team-high 24 assists, eight digs, and five blocks, including the set-ender in the fourth set. Outside hitter Emma Pachulski finished her volleyball career with an eight kill, seven-dig performance.  Kylie Oberlin led all Raiders with 12 kills while hitting .310 and adding three blocks.  MCCAA Western Conference Freshman of the Year Annie Holesinger finished with 11 kills and two big solo blocks.

In the Raiders 10 trips to nationals, the team has now finished in the top 10 seven times.  This year's group of seven sophomores finish off their careers with an overall record of 64-15, including 30-2 in the conference.  They also won the conference, MCCAA and district titles both years.

This story was reported by Ben Brown of the GRCC Athletic Department. More news about GRCC athletics is here.