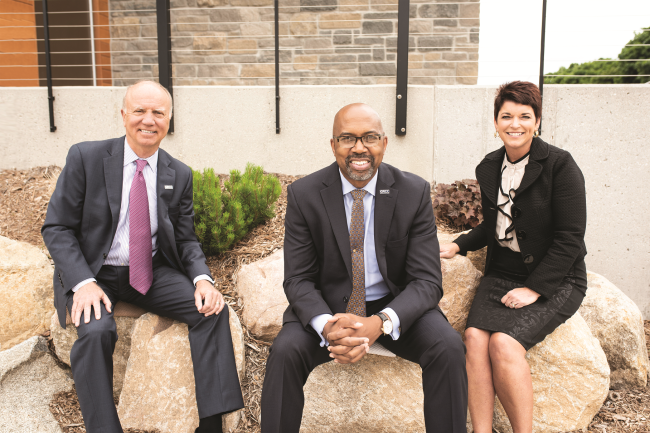 June 28, 2019 GRAND RAPIDS, Mich. — Larry Murphy, retiring as chairman of the Grand Rapids Community College Foundation board of directors, guided the organization during a time when increasing need for student support was met with expanded scholarship opportunities.

GRCC alumnus James V. Buzzitta, M.D., has been elected the new chairman after serving as vice chairman. Kristine Babcock was elected vice chairperson, and Doug Klein and Nancy Ayres will continue as the board’s treasurer and secretary.

Murphy, a Grand Rapids attorney, became a board member in 2010 and has been the chairman since 2016. During his time as chairman, the number of scholarships awarded increased 32 percent to nearly 1,000, and the total amount awarded increased by 34 percent to $1.1 million.

“Larry has been tireless in his support of GRCC students,” said Dr. Kathryn Mullins, vice president of College Advancement and executive director of the foundation. “He is passionate about GRCC’s mission, and focused on helping as many students as possible get resources they need to get an education to transform their lives.”

Murphy joined Buzzitta and GRCC trustee Deb Bailey as co-chairs of the foundation’s A Broader Vision campaign, an effort to raise $15 million for additional scholarships and renovated facilities. The public phase of the campaign launched in May.

“I am always moved by the stories behind the students who received scholarships, and of learning how their lives have been drastically changed for the better having attended GRCC,” Murphy said. “I tell people about the impact this community college has on Grand Rapids, and how the community’s support can help so many more students overcome obstacles to a solid education.”

Buzzitta is the CEO of Hughes Management, a healthcare facility development company. He founded Michigan Medical P.C., a physician-owned and governed medical corporation.

He graduated from GRCC and was honored with the 2011 Distinguished Alumni Award. He completed his undergraduate work at the University of Michigan, and received his doctorate at Wayne State University’s School of Medicine. He completed his internship and residency program at Butterworth Hospital, and obtained board certification in internal medicine.