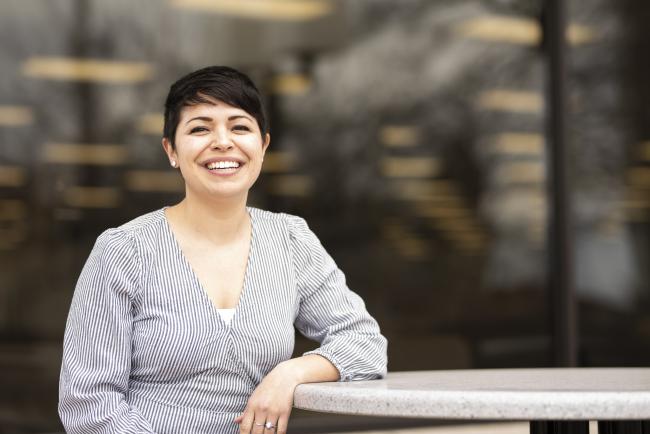 June Rayburn delayed starting college for four years in order to save up money and be sure that child development was what she wanted to study.

Finally starting her first semester at GRCC, she found herself in CLS 100, a course designed to prepare students for college.

She was annoyed -- at first.

“It actually ended up being really helpful,” she admitted. “I am first person in my family to go to college, so I really did not know what to do or where to go. In that class, I was given tours of campus, shown every resource GRCC has to offer, and various other useful tips. It was not a difficult class and was actually a bit fun!”

Rayburn, who worked full time and attended classes mostly at night, made use of that knowledge throughout her time at GRCC, seeking advice from faculty and getting help at the Math Tutorial Lab.

Julie Sizemore, an instructor in the Child Development Department, became a role model.

“Not only does she exemplify hard work, she also helped me grow as a professional,” Rayburn said. “She was able to give me a lot of constructive criticism that allowed me to reflect on and better my own practices. She wrote recommendation letters for me and has just been an advocate for me since my first semester at GRCC.”

Sizemore, who worked with Rayburn at GRCC’s Phyllis Fratzke Early Childhood Learning Laboratory, said she is a hard-working, model student.

“She is incredibly teachable,” Sizemore said. “June is always thinking outside the box. In the lab setting, she formed relationships with children naturally and was always smiling, regardless of the type of day she was having. Children gravitate toward her. Any classroom would be fortunate to have her as she moves forward in her career.”

Rayburn received her Associate of Applied Arts and Sciences this spring and plans to transfer to the University of Michigan this fall to study psychology.

“I want to work with children through psychology in some way or another,” she said. “I wasn’t sure I would get into (UM) as my grades in high school were not great, but I worked really hard to get good grades at GRCC. I currently have a 3.98 -- my lowest grade was an A-minus!”