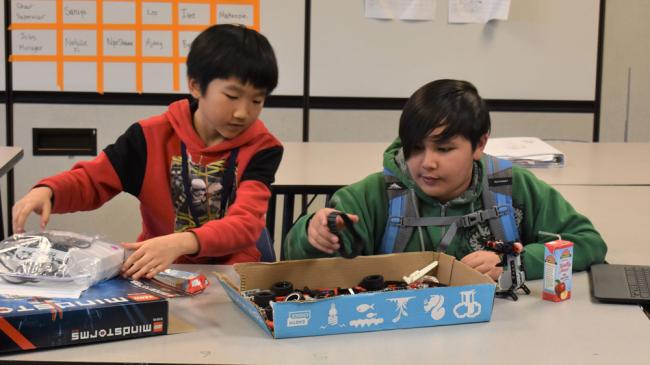 A School News Network feature: When asked why he joined the Kelloggsville Middle School robotics club, Avery Ganger had a simple answer: “I’m getting ready for the robot revolution.” He had a half-smile on his face that made it clear he was half-kidding.

His robot-assembling teammate, Keith McCune, grinned at Avery’s answer. “Robots are the future,” he said, “but this is more about fun. And our robot has a giant hammer.”

“It does look cool,” Avery admitted.

Meanwhile, the third member of the squad, Nathan Leyva, sorted through a big box of parts, looking for a pair of claws that the trio, all eighth graders, hoped to next affix to their creation.

Across the room, fellow eighth graders Brenda Duran-Diaz and Justyne Osborn were also having fun, but dealing with some frustrations, too.

Their robot’s schematics, housed on their laptop, told them to find a certain part at a certain length. But every piece they pulled from their storehouse of supplies seemed to be the wrong length.

“It’s frustrating sometimes,” said Justyne, “but as frustrating (as it is), it’s very nice to get it right and build it. These small pieces are hard. I guess it’s good to learn from your mistakes.”

Brenda concurred with a nod. “The robots are pretty amazing,” she said. “I think it’s fun to help each other and be in groups like this.”

For math teacher Kirsti Dickinson, those words are music to her ears.

“They’re learning to work in a team,” she said, “and they’re learning critical thinking skills and even some math, though they might not realize it. It’s why we started the club, and it’s been great to watch.”

Dickinson came on as a mentor midway through last year, and will continue to mentor its 15 sixth, seventh and eighth grade students through the end of the school year, alongside Kelloggsville middle and high school teacher Mary Campbell.

Right now the students are building and testing their robots. Later this year, Dickinson and Campbell plan to introduce some friendly competitions between the robots, and hope to have the students present their machines at family night.

Last year was the first for the robotics club at Kelloggsville, and it was just for eighth grade students. This year the program expanded to include sixth and seventh graders. The robotics the students build and program are Lego Mindstorm kits, developed by the company as a programmable robot on its signature building blocks.

A GEAR UP (Gaining Early Awareness and Readiness for Undergraduate Programs) grant from Grand Rapids Community College pays for the kits for the eighth grade students and a stipend for Dickinson, while Kelloggsville is paying for kits for sixth and seventh graders, plus snacks and transportation home for club members and a stipend for Campbell.

GEAR UP is a U.S. Department of Education program that earlier this year awarded GRCC a grant of $2.1 million over the next six years. It is aimed at Wyoming, Kelloggsville, Godwin Heights and Godfrey-Lee students and includes mentoring, tutoring, study skills workshops, college visits, career exploration and summer enrichment programs.

Steve Beauclair, director of GRCC GEAR UP Wyoming, said robotics and GEAR UP are a great fit. “Robotics is highly engaging,” he said, “and may help students deepen their interests in academics or STEM career pathways.”

For Avery, Keith and Nathan the underlying assumptions of the GEAR UP grant are fine. But they were on the hunt for a different part, and once they found it, they could plug their robot into their laptop, send it a new set of instructions and see if they could get the claws to work.