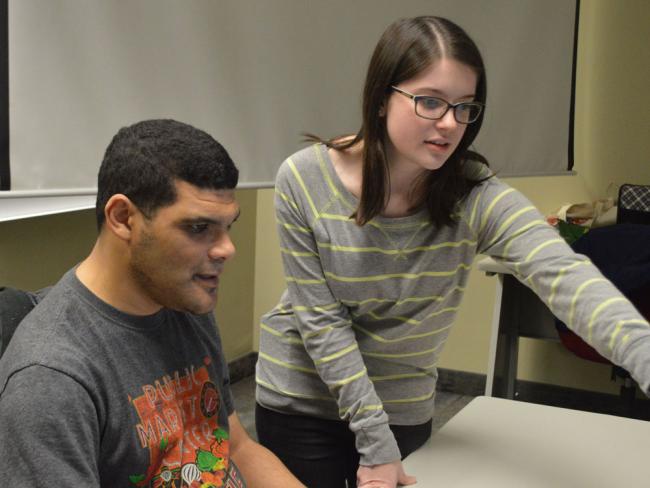 She spent the last few months learning about ecology and creative writing. “We’ve learned all different aspects of how ecology impacts us in the community and the world,” she said. They studied recycling, green roofs and herb gardens.

Noorthoek Academy, which is celebrating its 30th anniversary, is a private organization that works in partnership with GRCC to provide a post-secondary college experience in the arts and sciences for adults with intellectual impairments. The school gives Phillips and her peers a way to learn through a tailor-made curriculum. It’s a great place to come each week, she said.

“We get to be ourselves. We don’t have to put a face on to be accepted. We are accepted automatically,” she said. “We feel like one big family.”

First of Its Kind

Noorthoek Academy, which hosts classes at several locations on the GRCC campus, was founded in 1989 for people with intellectual disabilities after they’ve finished high school. A grassroots effort, cofounder Elizabeth Crouch wanted her daughter, Katy Crouch, to continue her education after completing Kent Occupational High School, a school for students with special needs formerly on the Kent ISD campus. Elizabeth Crounch and a group of special-education professionals — including school namesake, the late Joe Noorthoek — formed the GRCC partnership.

“There weren’t many opportunities for post-secondary education for special education students at that time,” said Mary Ruth Scholz, executive director of the academy. “It was the first of its kind in the nation.”

Since then, national efforts to create and expand high-quality, inclusive post-secondary programs for students with intellectual disabilities have resulted in the establishment of about 250 programs.

Noorthoek enrolls students ages 18 and older who have finished four years of high school. Almost 90 students attend fall and winter semesters, with courses such as Art and Science 100, Ecology, Computer 100 and Creative Writing 100.

“A new curriculum is built every semester depending on the interest of students,” Scholz said.

Students can join Student Leadership Club and take Yoga I as an inclusion partnership with GRCC students. Tuition is $250 for one class, $400 for two and $500 for three.

Like many students, those with special needs long for day-to-day college life and fulfilling opportunities to learn. Scholz and instructors aspire to offer the same type of experience as general education students.

“The biggest thing is the impact we can make on having a place where they feel like they belong,” she said.

That’s how it’s been for Sandra and Glen Corning. The married couple attend classes together, as well as Student Leadership Club, where they’ve learned to speak out for themselves about issues affecting people with disabilities.

“I’ve learned how to be a leader and do more for the community and speak about our disabilities,” said Sandra Corning.

Sandy Barraza, director of education, has taught at Noorthoek since 2009. “All I can say is this is just the best job I’ve ever had. We are a family. The students are so motivated to learn, and I get to learn along with them.”

Scholz is working to expand Noorthoek mentorship programs, for which GRCC students and community members serve as mentors. She’s seeking volunteers to work one-on-one with Noorthoek students in class and for social interactions. She’s also hoping to expand inclusion opportunities, for students to join GRCC classes.

“We all aspire to learn more,” Scholz said. “Being involved in a community that is for everyone and for all abilities challenges them to think and be who they want to be. Offering all kinds of inclusion experiences opens doors in their minds and the community’s mind.”

Phillips said being involved on campus is meaningful to Noorthoek students. “We feel independent,” she said. “The big deal is having a RaiderCard and going to events and being recognized. I’m part of a society bigger than coming home and going to school.”

“I feel proud of myself,” she said.