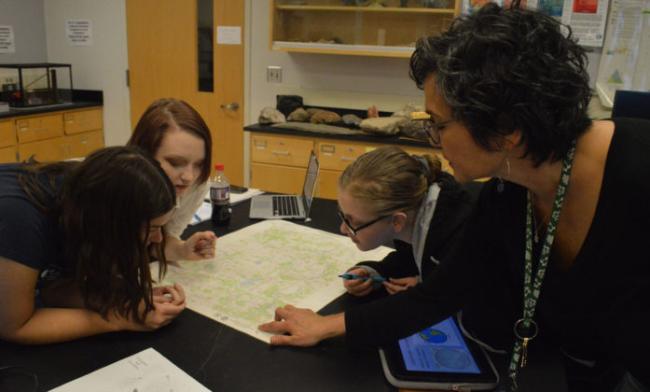 In geology professor Tari Mattox’s classroom, a pen etches a pattern that shows what’s going on inside the Earth, deep beneath your feet. Usually it’s a slow and steady scribe, in constant motion, but sometimes it jumps with excitement.

Mattox recently pulled up data on the screen connected to the seismograph. There’s a group of dramatic vertical lines on the screen dated Aug. 24, when a 7.1-magnitude earthquake shook Peru, causing the pen to jolt just 8.5 minutes after the quake hit nearly 4,000 miles away.

“That’s the earthquake,” she said, her voice revealing both expertise and fascination. “That’s how fast seismic waves travel. It makes students realize how much energy an earthquake has. It blows their minds.”

When it comes to brain-shattering information, Mattox has a phenomenal amount of it. The bedrock of her teaching philosophy is that experiences with the planet’s most exciting landforms and processes need to be accessible. She has stood in awe of the wonders of the geological world, studying erupting volcanoes, billowing lava fields, crystalline glaciers, often with her students in mind.

“My main focus is trying to bring real geology into the classroom,” she said.

The best part: Gems of knowledge are everywhere.

“One of the reasons I love teaching geology is it is very easy to demonstrate the relevance in their lives,” she said. “You can use everyday experiences in almost every kid’s life to demonstrate geologic principles.”

Mattox is a volcano expert who joined the GRCC staff in 2002, after a career that traversed the rocky world, from the U.S. Geological Survey’s Hawaiian Volcano Observatory where she monitored the Kilauea volcano, to Australia’s Commonwealth Scientific and Industrial Research Organization, where she dug deep for 3-billion-year-old nickel deposits.

Mattox worked in Hawaii from 1989 to 1995 as a volcanologist with the first all-female geology team at the observatory, monitoring the activity of the volcano. She recently served as a source for media outlets seeking an expert on the eruption at Kilauea, on Hawaii’s Big Island, contributing her knowledge about shield volcanoes in The Washington Post.

The daughter of parents who had a strong sense of wanderlust, Mattox was born in Oregon, and as a child lived in California, Jamaica and Honduras. Her mother is from Hawaii. She received her bachelor’s degree in geology from McGill University in Montreal, Canada, and began her professional career as a consulting geologist monitoring groundwater in Indiana. She continued her education at Northern Illinois University in DeKalb, where she studied the chemistry of volcanic rocks from the Central Volcanic Zone in Chile.

She explained her passion for geology like this: It’s a slow science that results in change over the millennia, yet it’s punctuated by explosive moments that change the planet with sudden force. That’s exciting, she said.

“You can’t watch a continent tear apart and an ocean form in your lifetime, but there are some geologic processes that do happen where you can see changes in real time: glaciers and volcanoes,” she said. “We can actually watch volcanos erupt in real time; we can see lava and rock being formed before our eyes..

“Being able to see it is fun.”

“She’s been one of my favorites,” said student Kelly Garnet about Mattox’s expertise working  with volcanoes. “It sounds more real — you can actually get jobs in this.”

“It’s pretty cool that she gives us those experiences,” said Natali Gomez, as photos of Iceland were projected on the classroom wall. “The pictures and examples she shows really help us.”

“It’s exciting,” added student Cody Ketchum. “She’s really passionate about it, so that makes us enthusiastic about rocks.”

With husband Steve Mattox, a professor of geology and Integrated Science Program coordinator at Grand Valley State University, Mattox is applying for a National Science Foundation grant to fund a program for GRCC and GVSU students to go on a trip to Iceland. The couple spent last summer in the Nordic country collecting specimens and imagery for students to experience the volcanic rock, glassy fjords and breathtaking landscapes.

Obtaining a NSF grant is very competitive, she said, but bringing students there would mean exposing them to a whole new rocky world: “It’s ‘geology crack,’” she quipped.

But Mattox wants to make sure all students experience that level of geology wonder as much as possible. GRCC enrolls many nontraditional students who are working full-time, raising families or who find travel difficult for other reasons. For them, Mattox is collaborating on a virtual reality field trip to bring 360-degree views and 3D worlds of geology to students. She is partnering on the project with Michael Coluzzi, a former GRCC student who is now a senior at Ferris State University.

“Geology is very field-trip driven, and I want to be able to bring that to everyone,” Mattox said.