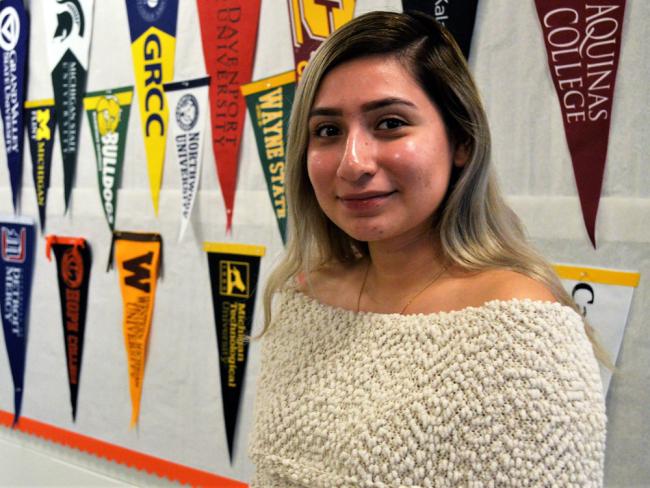 A School News Network feature: -- Karla Lopez listened intently as a school official gave her the news: She was fully qualified for a Grand Rapids Promise scholarship, paying for her tuition, books and fees at Grand Rapids Community College next fall.

For Karla, a senior at Grand Rapids University Preparatory Academy, it was not just a relief to confirm she would receive the Promise scholarship newly offered to all resident graduates of city high schools. It was also a reward for her many years of hard work and quiet determination as the child of a single mother. She will be the first in her family to attend college.

After a difficult fall semester in which she was unable to complete her classes due to illness, Karla is wrapping up her credits online and expecting to graduate early, in March. The scholarship came as a light at the end of a long tunnel for her.

“It means a lot to me,” Karla said on a recent morning at UPrep, as it’s known. “Knowing that I’ll be able to go to college and continue to go to school, it made me really happy, really excited.”

She is equally excited for her mom, Maribel, who’s raising two daughters on two jobs, and who has always wanted Karla to have a better life than she’s had.

“I feel like I owe it to her, not just myself but for her, because she has been able to get us through so many things,” Karla said of herself and her sister, Cassandra, an eighth grader at UPrep.

She’s among more than 1,000 students estimated to be eligible for Promise scholarships upon graduating this spring. They come from one of 24 high schools in Grand Rapids, including nearly a dozen GRPS schools and Catholic, Christian and charter schools. The Michigan Department of Education recently approved the development plan submitted by the Grand Rapids Promise Zone Authority Board.

As one of 15 designated Promise Zones in Michigan, the public-private partnership aims to help students surmount the barriers to college and job-training programs. For Karla and many others, the highest barrier has been the sheer cost of a college education. For a student taking a full course load of 30 credits at GRCC in the 2020-21 school year, that adds up to nearly $5,000 saved in tuition, books and fees, according to the Promise Zone Authority’s best estimate.

But besides getting that very tangible leg up, Karla also says she’s been boosted by attending UPrep, itself a public-private partnership designed to help students who might not otherwise find a ready path to higher education. More than 90 percent of its students graduate.

“The teachers here want every single one of their students to succeed and to do their best,” said Karla, who’s been a UPrep student since sixth grade. Personal attention from her teachers, flexible course work, business internships and visits from college reps have helped her overcome family financial challenges and health hardships, Karla said.

Those health hardships afflicted both Karla and her mother; her father died when Karla was an infant. Four years ago her mom was diagnosed with thyroid cancer.

“I just remember being with her 24/7, taking care of her, even though I was still 14,” Karla said. Her mother has since made great progress, with no cancer evident, and the experience sparked Karla’s interest in becoming an oncologist. “I just want to be able to help people,” she said.

Karla encountered her own problems last fall when she developed chronic stomach pain. She had difficulty keeping food down and couldn’t eat much. She missed a lot of school and fell behind on the courses she needed to graduate.

“I was always in pain,” she recalled quietly. “I wasn’t focused on the work. The pain was unbearable.”

It seemed like a huge boulder had fallen onto her path to higher education. “For college, I was just lost,” she said. “I got to see many of my classmates move on, seeing them getting accepted. And I was just stuck.”

However, medication eventually enabled her to get back to school, and UPrep lined up a plan for her to finish two courses online that she needs to graduate. She hopes to attain her required credits for graduation sometime in March, and plans to walk with her fellow graduates in May.

As she closes in on graduation and college beyond, she already has four classes at GRCC under her belt, taken through dual enrollment. Looking further ahead, she’s considering Grand Valley State University, Aquinas College and Calvin University for a four-year degree program.

The Promise scholarship took the huge boulder out of her way by easing the stress of financial worry for her and her mother. UPrep staff are helping her take the final steps to win the scholarship, including filling out the Free Application for Federal Student Aid (FAFSA).

On a recent morning, Karla went over other possible scholarships with Assistant Principal Jessalynn Radden and KJ Tucker, college and career coordinator. They gave her a pep talk about enrolling at GRCC and doing well there.

“We don’t want you guys to have to start off your adult life with debt,” Radden told her. “We want better for you.”

‘I Feel Proud of Myself’

Radden, who taught Karla in sixth and seventh grade, said she’s seen her grow from an extremely shy, quiet adolescent to “a young woman who’s very confident.” She reminded Karla that she’s been well prepared for college by UPrep, where students take two-hour classes.

“I can’t wait to see what you do, because truly you could do whatever you want to do, as long as you’re working hard and staying focused,” Radden told her. “I want you to enjoy it, but continue to work hard, so you can have the life that your mom’s been talking about, that you want to be able to have.”

It’s the life Karla intends to have and has worked hard for, despite her many challenges.

“I just kind of feel proud of myself,” said Karla, who’s not given to self-praise. “I didn’t let any of those things set me back, as for what I’ve been able to accomplish so far.”

This story was reported by Charles Honey of the School News Network.