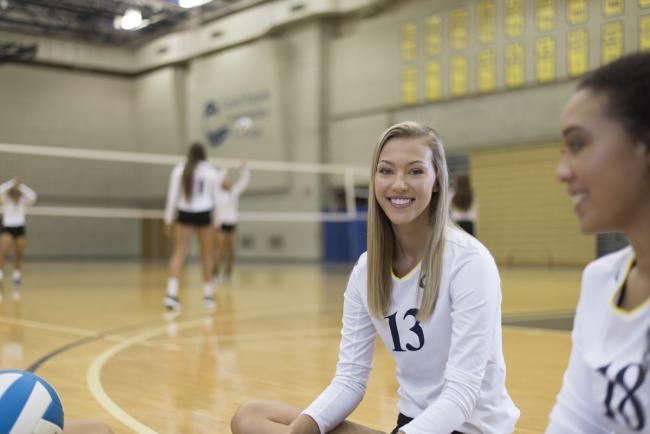 Dec. 6, 2018 GRAND RAPIDS, Mich. — Grand Rapids Community College volleyball player Kendra DeJonge earned All-American honors for the second year in a row, adding to her legacy as one of the college's most-decorated athletes.

DeJonge, a Rockford High School graduate, helped lead GRCC to a 6th-place finish in the NJCAA Division II Volleyball Championship last month. An outside hitter, she was recently named Player of the Year for the Michigan Community College Athletic Association Western Conference.

"Achieving First Team All-American status is a very humbling feeling to me," DeJonge said. "I’ve always wanted to be the best player and teammate I can be, so being able to make my goals a reality is awesome. I’ve been able to count on my team and coaches to have my back, which has made our accomplishments this season possible. I couldn’t have done it without them."

It is DeJonge's second year on the AVCA All-America list. She was named to the NJCAA Division II Second Team All-American as a GRCC freshman.

Coach Chip Will says DeJonge has been key to this season's success.

"Kendra has been a leader the past two years on and off the court," Will said. "She has represented all the characteristics that we expect from our GRCC student-athletes. She has left a great legacy for future Raider Nation players."

"Despite all of Kendra's accomplishments, she has remained humble and a great teammate, which says a lot about the person she is," he said. "Along with being an All-American on the volleyball court, Kendra has also earned First Team All-Academic honors from the NJCAA for her hard work in the classroom as well."

DeJonge, who started in every match this past season, has a .223 hitting percentage with 498 total kills, which places her 12th in the nation. She also averages 4.78 points per set, placing her at 15th in the nation.

She plans to receive her associate degree in business this spring and plans to transfer to a four-year school to continue her education.