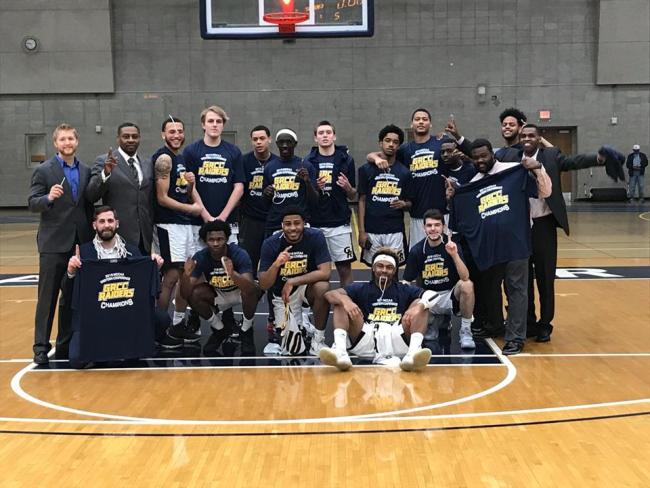 In a game with eight lead changes and 12 tied scores, GRCC came out on top, improving to 23-6 overall and finishing conference play with an impressive 15-3 record. The Cougars’ loss eliminates them from post-season play and they finish their season with a 10-20 (7-11) record.

The Raiders jumped out to a 5-0 lead, but were held scoreless for the next four minutes.  Luckily for them, KVCC was held to just seven points during that time span, and William Otole’s jumper with 14:43 on the clock tied the ball game back up.  An 8-0 run capped by two free throws from Otole made it a 31-23 game and the conference champs led 34-28 at the half.  Sammie Ryans and Ike Kanu each had 10 points for GRCC.

The Cougars rallied back from being down seven to take their first lead of the second half after an Evan Finch three with 10:34 on the clock. They extended their lead to three, 50-47, but two free throws by Ryans gave the lead back to GRCC, 52-50.

With just 2:27 left in regulation play, Darrian Burkett scored a layup and was fouled.  His three-point play gave KVCC the lead 59-58.  Both teams proceeded to miss their next five shots, including two free throws by the Cougars, before one of Kanu’s huge rebounds with 1:44 to go. Ryans missed a three-pointer, but Kanu was fouled on the rebound and he went to the line to tie the ball game at 59.

Camren Spicer had one of his game-high five steals with 1:09 remaining, but the Raiders couldn’t convert on the other end.  The Cougars then turned the ball over again. This time, it was Ryans with the steal, and GRCC would call time with 26 seconds left.  Ryans’ three-point attempt was just short and Kanu’s putback as time expired just rolled off, and, for the third time this season, overtime it would be.

In the extra period, it was all Raiders.  KVCC’s Jovaun Jones scored the first basket, but the Raiders would out-score the Cougars by nine the rest of the way.  David Hearns and Spicer finished with eight of the 13 Raider points and added three steals.

Kanu finished the game with a team-high 19 points on eight of 16 shooting.  He also grabbed a game-high 16 rebounds, including 11 on the offensive end.  Hearns was a solid six of 11 from the field and finished with 18 points, seven rebounds, four assists and four steals.  Ryans scored 14 and grabbed six boards, while Spicer had 10 points, six rebounds and the five huge steals.

By winning the Western Conference, the Raiders will play in the MCCAA Championship against Henry Ford College, which won the Eastern Conference on Wednesday.  That game starts at 3 pm. Saturday in Dearborn. They won’t play again until 7:30 p.m. March 8 in the District semis against either Mid-Michigan Community or Muskegon Community colleges.