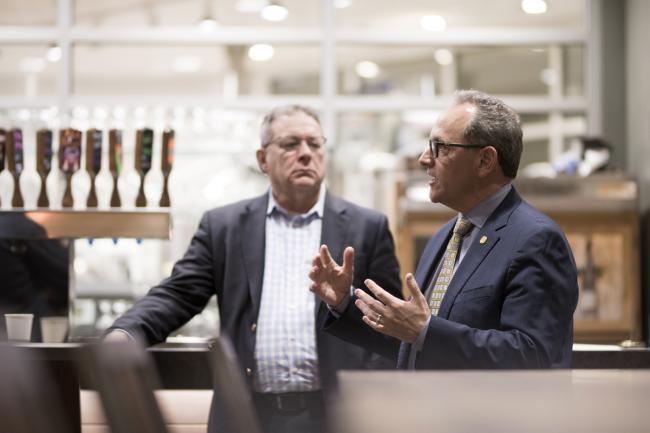 The State House of Representatives’ Appropriations Subcommittee on Community Colleges conducted a public hearing at GRCC’s Wisner-Bottrall Applied Technology Center, asking about financial pressures facing community colleges and what role the colleges can play in Michigan’s efforts to close the state’s talent gap. The subcommittee is chaired by state Rep. Chris Afendoulis, a GRCC graduate.

“It’s tremendously import that we remain relevant and responsive to our students and our community,” Pink said. “We’re listening to families and local employers, and that’s reflected in our innovative and growing programs, from early/middle college efforts in our high schools to apprenticeships that provide both an education and on-the-job training.”

GRCC has a strong economic impact on Kent and Ottawa counties, with nearly a half-billion dollars in total income added, he said.

Working with local partners in the business community, the college has increased apprenticeship programs that lead to good jobs, expanding from two fields in 2010 to five in 2018, and from 287 students to 830. That includes a first-in-the-nation accredited medical assistant apprenticeship program, a partnership with the U.S. Labor Department, West Michigan Works!, Mercy Health, Cherry Health, Spectrum Health, Montcalm Community College and Muskegon Community College.

Responding to questions from lawmakers, Pink said that while he is concerned about any potential finance challenges, the college is working to keep tuition increases to a minimum while hoping for reliable year-to-year funding from the Legislature to support programs and improve infrastructure.

Pink said GRCC and other community colleges are ready to play a large role in Gov. Rick Snyder’s Marshall Plan for Talent, and is looking forward to hearing details about potential training programs and expanded partnerships.

Representatives also toured the college’s brewery, where GRCC students work toward a Craft Brewing, Packaging and Service Operations Certificate. Equipment for the program, the first of its kind in the nation, was purchased with a combination of a state Community College Skilled Trades Equipment Program grant and a donation from local philanthropist Peter Secchia.

“Grand Rapids Community College is an excellent example of higher education collaborating with partners in the K-12 districts and the business community to give students of all ages opportunities to be successful,” Afendoulis said. “One of the reasons we conduct hearings like this away from Lansing is to see firsthand the tremendous work being done at GRCC and across the state.”