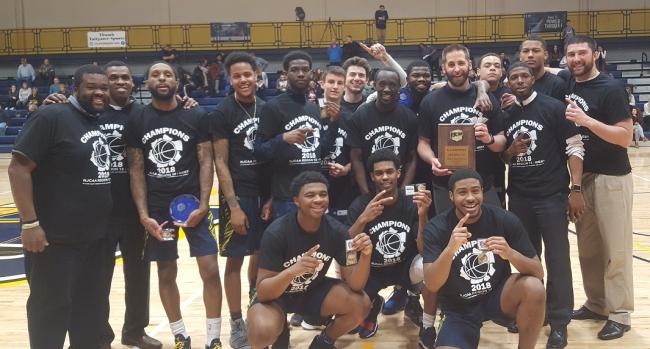 The Raiders beat top seed Ancilla College in the District 9 Championship on March 10, earning an automatic spot in the National Tournament.

The team, with a 24-8 record, also is celebrating individual honors, with Coach Luke Bronkema named District 9 Coach of the Year for the second year in a row, and Zachary Pangborn named the tournament’s Most Valuable Player.

The National Tournament is March 20-24 and will be hosted by Danville Area Community College in Danville, Ill. The Raiders will find out who they face in opening round action when brackets are revealed during the NJCAA Division II selection show on March 14.

“I’m proud of my players, who worked tremendously hard to get to this point,” Bronkema said. “We faced tough competition, but the guys were prepared and energized. It’s good to see them rewarded for their efforts by heading to the National Tournament.”

Pangborn, a Northview High graduate, averaged 26.6 points per game over the three-game tournament. Curtis Davison, a Union High graduate, and Anthony McIntosh, who graduated from Ottawa Hills High, were named to the All-Tournament Team.

“The basketball team’s success is another indication that we have something very special here at GRCC,” President Bill Pink said. “Our student-athletes work hard in the classroom and in the arena, and we’re seeing the results.”