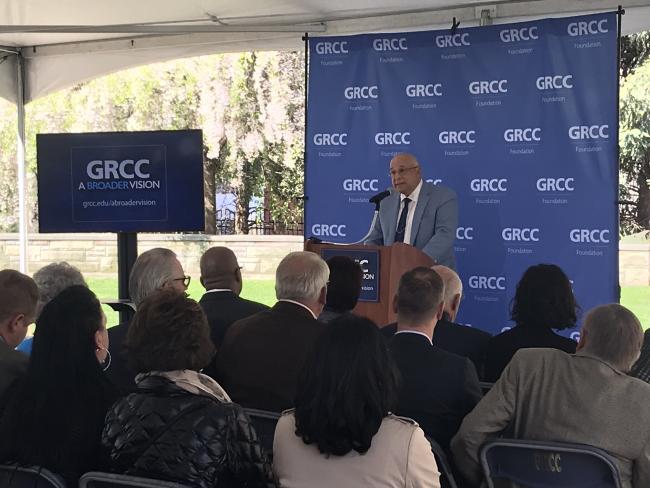 “Grand Rapids Community College is the pathway to success for many in West Michigan, but there are so many more people who need help to remove the barriers that are keeping them from getting the education they need,” GRCC President Bill Pink said. “We also need our facilities to be a 21st-century learning environment so students can gain up-to-date skills needed for rewarding careers in a rapidly changing, global economy.”

Campaign leaders announced that the GRCC Foundation has raised $12 million toward the $15 million community based fundraising goal, with donations from community leaders, local businesses, area foundations and GRCC employees.

The public-facing effort comes after support from the state of Michigan and the GRCC Foundation for scholarships and a 20,000-foot expansion of the Wisner-Bottrall Applied Technology Center.

The nearly 100-year-old Main Building was renamed Raleigh J. Finkelstein Hall this year in honor of his support, allowing leaders to modernize and reconfigure classroom and lab spaces. A dedicated space will also support technology-based learning.

GRCC embraces its open access mission, meeting students where they are and getting them where they need to be. Many of them need the financial support of a scholarship to help with challenges outside the classroom. About 1,000 students received scholarships last year, but many more need help, campaign leaders say.

Campaign co-chairs Dr. Jim Buzzitta, Deb Bailey and Larry Murphy asked the public to support the fundraising effort, which will continue through the end of the year.

“The need for scholarship support has never been greater,” Murphy said. “One out of every three high school grads in Kent County touches GRCC in some way, but the college also serves non-traditional students, including older students who are coming back to finish their education and change their lives. Such opportunity has a tremendous impact not only upon the student, the results can beneficially affect a family for generations.”

Bailey said an investment in GRCC is an investment in West Michigan, making our community stronger by serving as a resource for both students and employers. Studies determined that GRCC’s credit programs have an annual economic impact of nearly a half-billion dollars on the West Michigan economy, with noncredit workforce courses accounting for hundreds of millions of dollars more.

“GRCC is an economic driver for the region,” Bailey said. “If we want our kids, our grandkids, and our neighbors to live in a community that is thriving, it’s critical to invest in GRCC.”

Buzzitta said many people in West Michigan got their start at GRCC, with some continuing their education and others gaining career skills to support their families.

“We hear many stories from people in our community who owe their success to GRCC,” he said. “Many of those people were able to attend through the generosity of people supporting scholarships -- and there can be so many more who can get an opportunity because of people stepping up and making a difference.”