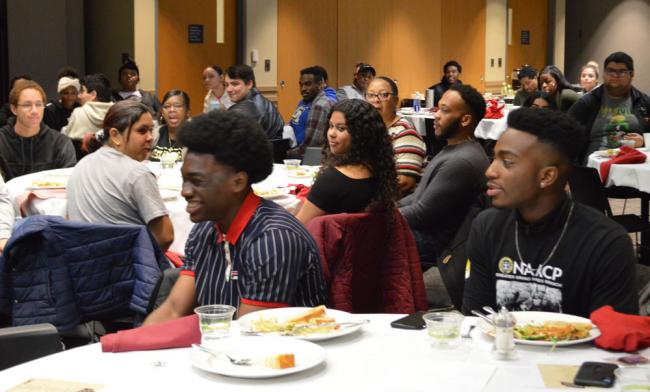 A School News Network feature --  Cynthia Browne has come a long way since she started her first class at GRCC. She remembers being afraid to ask questions and confused by how things worked.

“I was terrified my first day of school. The professor talked about doing homework on Blackboard and I looked around and didn’t see one,” quipped Browne, the student keynote speaker at the “Rite of Passage” ceremony for three student groups primarily made up of students of color.

The luncheon, hosted by the GRCC Office of Diversity, Equity and Inclusion, included a pinning ceremony for about 80 members of ALAS, which is mostly made up of Latino students; NIA, which is mostly women of color; and Brother 2 Brother Network, which is primarily African American men. (Alas means ‘wings’ in Spanish, and Nia means ‘purpose’ in Swahili.) Each member received a pin with their organization’s emblem on it.

The groups, while open to all students, support populations that are historically underrepresented in college, said B. Afeni McNeely Cobham, chief equity and inclusion officer.

“The students who are here today are passing through the next step of their academic journey at many different points. When you are going through a passage, it’s never an endpoint; it’s a continuum,” McNeely Cobham said. “We wanted to reiterate that success doesn’t have an endpoint. It’s something you continue to build on through each passage you go through.”

A Cohort of Support

As group members, students focus on navigating the college experience, McNeely Cobham said. About 90 percent of the students are first-generation college-goers, meaning they are the first in their family enrolled.

“A lot of students talk about how important it is to have a sense of belonging, almost like an extended family, as you go through this experience… For them the college experience is brand new.”

“Imagine having a cohort to go through that journey with.”

NIA member Halima Sufi has looked to the group for role models.

“Being a part of this group is about seeing a bunch of women in different avenues of life. It’s very inspirational and motivational,” said Sufi, a first-generation college student who graduated from Ottawa Hills and plans to become pre-law. “Sometimes when you feel like giving up, you can look at them and say ‘If she can do it, I can do it.’ It’s about empowering women.”

Brother 2 Brother member Darian Banks said the group has taught him to speak up. “It’s really made me be more comfortable meeting new people and being able to express myself,” he said. “It helps students come out of their shell and get out of their comfort zones.”

While speaking at the ceremony, GRCC President Bill Pink, who is African American, said he likes to pay attention to statistics such as low degree-attainment rates among African American males and decide how to react to them. “Are you going to be a part of the statistic, or do you defy the statistic? Do you make the statistic skew the other way?”

For students of color, the “goal is to knock the statistics out of the park,” he said. “One day you need to be a GRCC graduate,” Pink said. “Make sure nothing in this world gets in your way.”

Keynote speaker Browne, who is 51, said GRCC helped her overcome a fear of school. She spoke of a difficult upbringing, rife with neglect. She lacked confidence and was told early on that she wasn’t college material.

It wasn’t until she was working in adult foster care for Network 180 that she signed up for classes at GRCC. The state had changed medical charting to a computerized system, which required her to earn six college credits. Despite her reservations, she dove into the opportunity.

Browne graduated from GRCC in 2018 and has since received her bachelor’s degree in criminal justice from Ferris State University. She plans to pursue her master’s degree.

Browne earned all As and one A- her first semester, and began to develop the confidence to speak up. She joined NIA and many other organizations. GRCC students and staff became like family to her.

“What this school has given me is a voice,” she said.