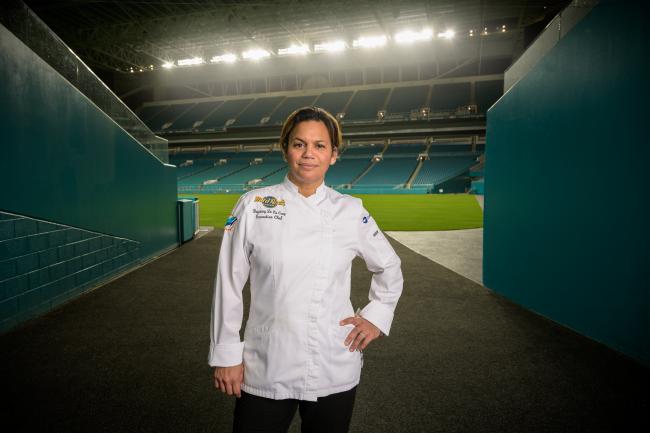 January 24, 2020 GRAND RAPIDS, Mich. -- Grand Rapids Community College alumna Dayanny De La Cruz has a game plan for the upcoming Super Bowl LIV, and it’s got nothing to do with the action on the field.

De La Cruz is the executive chef for Miami’s Hard Rock Stadium, supervising meals for tens of thousands of people as the Kansas City Chiefs and San Francisco 49ers battle for the NFL championship.

De La Cruz is a pioneer, the first woman and Latina to head an NFL stadium catering operation. She’s also guided food preparation for other large events, including the Kentucky Derby, U.S. Open tennis tournament and the NBA All-Star Game. As chef for the Miami Heat basketball team, she prepared meals for LeBron James and was awarded a championship ring.

But De La Cruz rose from humble beginnings in her native Dominican Republic and says the faculty at GRCC’s Secchia Institute for Culinary Education played a large role in her success today.

“This was my safe haven,” she said of GRCC during the recording of the “My GRCC” podcast. “This was my place for me to grow, but at the same time, develop the best thing I have today, which is my career. And, also, the love that I have for food and everything I learned through the process from my mentors.”

“They made me who I am today,” she said of the GRCC faculty. “They saw something in me I didn’t know I had. That’s something I can still be thankful for. I couldn’t have finished school without them – without each and every one of them. Each one of them played a special part in my life.”

She attended for a semester in 2003, then needed time to help her husband through a health issue and care for her young children.

Professors kept in touch, encouraging her to come back and complete her degree. When she came back in 2005, she said professors understood the challenges she was facing. She used to support her family by working overnight making empanadas to sell at the farmers market for $1 each starting at 6 a.m. before heading to class.

De La Cruz graduated with honors: She was the first Latina and second woman to receive the Secchia Institute’s Director’s Award.

“I knew I was going somewhere,” she said. “I needed to find my ‘north,’ my niche, what I was good at. I think one of the things I took from each one of my teachers and the people around me is that: If they believe in me, why could I not believe in myself? Why could I not go out there and do it? So, I pushed through.”

She worked as executive chef at Doubletree Hotels in the Chicago area before becoming interested in the sports and entertainment industry, overseeing food preparation for large events. That lead to working in Miami and American Airlines Arena and the Heat basketball team.

De la Cruz has been with Centerplate, the company providing meals at Hard Rock Stadium since 2017.

She jokingly calls the Feb. 2 Super Bowl “my big baby.” She’ll oversee 100 chefs coming from as far as Denver and Vancouver as well as 2,400 culinary staff members. On the menu are 2,700 Maine lobster tails, 6,000 servings of short ribs, 10,000 hot dogs and her specialty, a Cubano sausage.

She’s proud to highlight local Miami businesses and their products, and is helping to usher in a green era at the stadium, with 99.4 percent of single-use consumer plastics planned to be eliminated from food and beverage service for Super Bowl LIV.

“I’m very driven. For me, it’s about challenging myself on a daily basis,” she said. “I call it the magic of game day. You realize that for all the things to work, all the things you planned for, for days and days come to fruition. You look down and say somehow, I touched each and every one of those 57,000 people sitting in those seats. It’s great.”

She returned to GRCC in November to meet with students as part of the Fall Culinary Speaker Series, sharing her appreciation for the college and her love of cooking.

“Food comes from your soul,” she said. “My mother used to say no one cooks the same because our hands are not the same. When you cook, you bare your soul. It’s very personal. It’s very intimate. So when you cook for so many people, you are bearing your soul to thousands and thousands of people.”

"She is a true inspiration to many culinarians, especially female chefs," he said. "It's an honor to have her as an alumna of the Secchia Institute for Culinary Education. Chef De La Cruz's story is also an awesome testimonial to the underpraised and underfunded work community colleges and their faculty engage in across the nation to prepare students for relevant and rewarding careers."

You can listen to the entire “My GRCC Story” podcast here. The photograph is from Matthew Noel and is courtesy of Centerplate.