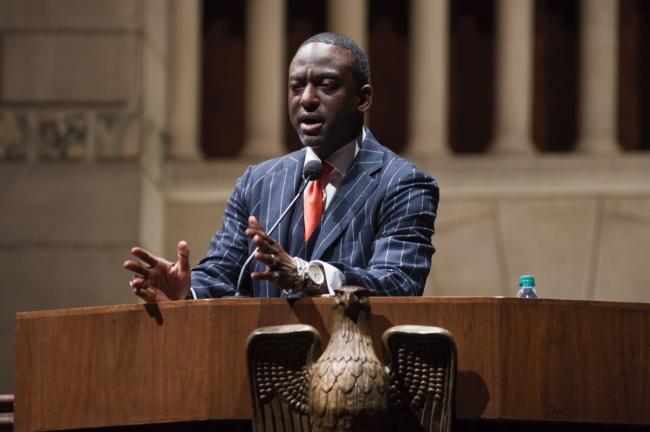 Salaam, Antron McCray, Kevin Richardson, Raymond Santana and Korey Wise — black and Hispanic teenagers from Harlem — spent seven to 13 years in prison for the rape. Their convictions were overturned in 2002.

Salaam was presented with a Lifetime Achievement Award from President Barack Obama in 2016. The case was the subject of an Emmy-nominated Netflix feature, “When They See Us,” directed by Ava DuVernay, and an award-winning documentary, “The Central Park Five,” by Ken Burns, Sarah Burns and David McMahon.

Sentenced as a Juvenile

Salaam spoke of his experience of being arrested and put on trial at age 15 for a crime he didn’t commit. “Fifteen is still a baby,” he said. “The hopes and dreams of life is still in the eyes of a 15-year-old.”

But the message to young black males in Harlem in the 1980s was that they had no future, he said. “We come from a community where they say you are going to be dead or in jail before you reach 21. The interesting thing is no one I know has ever physically sat down and said, ‘I planned that for my life.’

“Somehow the evil eye has been casting its idea and broad brush-stroking the families and communities we know and love and leaving gaping holes in the fabric and the fibers of the human family.”

From the podium, Salaam held up the full-page ad then business tycoon Donald Trump took out in the New York Daily News calling for the reinstatement of the death penalty in response to the Central Park Five case, just two weeks after they were accused. Trump has refused to apologize for the ad.

“We hadn’t even gone to trial yet,” Salaam said.

Newspapers published the boys’ phone numbers and addresses, he said, leading people to harass their families and send threatening letters.

He had to face that adversity and much more through his time in prison, when he always maintained his innocence. Salaam talked about rising up against injustices and finding one’s purpose.

“When the rest of society is telling you that you are worth nothing. I want you to remember you are worth everything,” he told the crowd, which included many students.

He said his life was restored in 2002 when the conviction was overturned. Still, it didn’t erase what happened.

“You can’t reverse the mistake,” he said. “That kind of injustice is not an anomaly. It has been a part of American history and is probably as American as apple pie. We have to do everything in our power to ensure that our children grow up in a world that gives us true justice, true liberty, true freedom and true equality.”

Along with students from many schools, the speech was attended by Grand Rapids Public Schools sixth grade students who entered essays in a contest called “Keeping the Dream Alive,” and sponsored by law firm Warner Norcross + Judd.

Acaria Powell, a sixth grader at Shawmut Hills Elementary School, said she was inspired by the Netflix documentary and hearing Salaam. “I really want to speak to my friends about it. There is still the problem all over the country with injustice.”

GRCC political science major Sayroan Mohamad said Salaam’s authenticity resonated with her. “When he speaks, he speaks for all of us,” she said. “The question is what are we going to do to make real change.”

This article was written by Erin Albanese and photographed by Dianne Carroll Burdick of the School News Network.