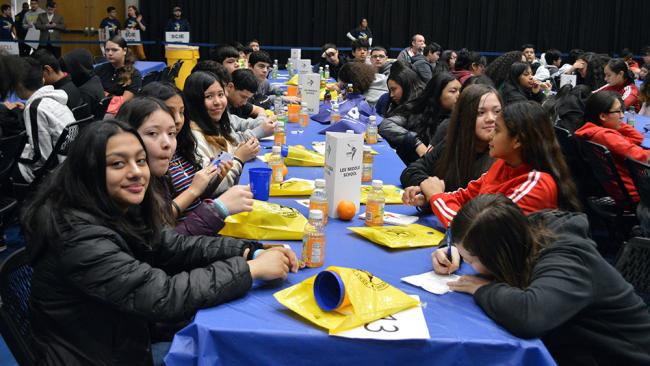 School News Network feature: Architect. Baker. Chef. Zoologist. In a classroom inside GRCC’s Peter and Pat Cook Academic Hall, eighth graders jotted down careers, one for each letter A to Z, on miniature white boards.

They had just made educated guesses on how many years of college it takes to earn a degree needed to work in a certain career. A teacher requires a bachelor’s, for example. A nurse requires an associate or bachelor’s degree.

The students, from Grand Rapids Public Schools' Alger Middle and Aberdeen K-8 school and Kentwood Public Schools’ Crestwood Middle, were participating in a workshop led by Robin Sterk, Grand Rapids Community College's director of high school partnerships. It got them thinking about careers that fit their interests and personality traits with careers.

The workshop was one of 31 held as part of the annual Latino Youth Conference. The event welcomed about 830 eighth graders from 24 Kent Intermediate School District schools to learn about opportunities and resources available to them in high school, college, skilled trades and careers.

“It’s a really good way to help kids like us come up with ideas to find what we want to do– our passions,” said City Middle School eighth grader Juan Caceres, who isn’t entirely certain what career he hopes to pursue, but likes design.

The conference, supported by GRCC’s Office of Diversity, Equity and Inclusion, encourages eighth grade Latino students to think about the future and begin to connect the dots between high school, college and careers. Prior to the event, conference committee members surveyed eighth graders on topics they would like to learn more about. Among them were entrepreneurship, culture, identity, life after high school and finding purpose.

“We really wanted to be intentional about making this relevant,” said Sonya Hernandez, ODEI assistant director. “The topics are vast, and the students have the opportunity to learn so much.”

Among two- and four-year institutions, GRCC is among top schools in the state for Hispanic student enrollment and associate degree attainment. The expansion of the Grand Rapids Promise Scholarship to include all students in the city of Grand Rapids who graduate from one of its 22 public, private and charter high schools should boost those numbers even more. Many students will be eligible for two-year scholarships to GRCC, Hernandez said.

“The scholarship is not a game changer; it’s a life changer. We have DACA students. We have undocumented students who can’t otherwise afford college. GRCC is going to be their new home.”

In another workshop, City Middle School students practice designing their own STEAM rooms in a session led by Grand Rapids firm Progressive AE architects and engineers. Students learned how to attain degrees in those fields, and what the jobs entail.

While he worked on his blueprint, City Middle School eighth grader Henry Hernandez said the message that resonated with him during the conference was: “Create your own path.”

Said Henry, “Things like this are good for us so we can find a career we are interested in.”