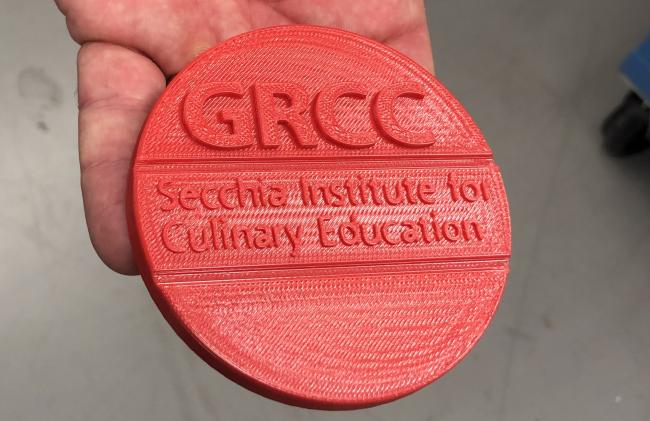 March 9, 2020 GRAND RAPIDS, Mich. -- The Grand Rapids Community College Foundation is ready for all the sweet tooths stimulated by the Broadway Grand Rapids production of “Charlie and the Chocolate Factory.”

Students in GRCC’s Secchia Institute for Culinary Education worked with those in the Mechanical Design and Advanced Plastics class to create unique chocolate treats for sale during the play, which runs March 10 to 15.

This is the second time that the foundation has partnered with Broadway Grand Rapids on a fundraiser to help create opportunities for GRCC students. Culinary faculty and foundation staff sold “pie in a jar” during the run of “Waitress” last spring.

“We appreciate our community partnerships and the generosity of Broadway Grand Rapids theater patrons,” said Dr. Kathryn K. Mullins, vice president for College Advancement and executive director of the GRCC Foundation. “Scholarships are key to helping our students get the education they need to transform their lives.”

The creation of the medallions also is a result of partnerships -- among classes in the GRCC School of Workforce Development. Like planning recipes and preparing tasty desserts, designing and producing the molds was a mix of science and creativity.

“Charlie and the Chocolate Factory” is based on Roald Dahl’s classic book about young Charlie and the mysterious, magical Willy Wonka. The musical includes songs from the hit film and new tunes from the songwriters of “Hairspray.”

“We are proud to partner with Grand Rapids Community College, especially its highly renowned Culinary Institute. The chance to help with scholarships to the program is wonderful icing for this week of outstanding shows,” Broadway Grand Rapids Executive Director Mike Lloyd said.

Broadway Grand Rapids was established in 1988 with a mission to bring in the very best of national touring Broadway productions to West Michigan. Broadway Grand Rapids and Michigan State University’s Wharton Center for Performing Arts in 2009 created a partnership that was dramatic - literally and figuratively. This pairing created an enhanced opportunity to secure top-notch shows for our DeVos Performance Hall venue. Each season brings legendary stories and memorable music to the stage helping to bring the power and magic of theater to our community.