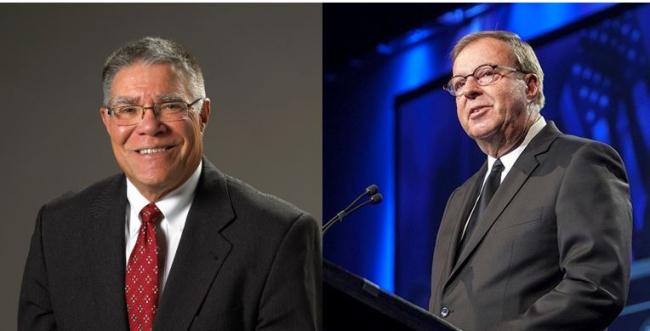 Mable Engle House will now be known as Steven C. Ender Hall, and the Lettinga House will be the Custer Alumni House following unanimous votes from trustees this week. The two buildings are part of the DeVos Campus and will have new roles after undergoing renovations to be completed this summer.

“Both President Ender and Dave Custer made a tremendous impact on our campus, its students and our community,” said Dr. Kathryn Mullins, executive director of the GRCC Foundation and vice president for College Advancement. “This is an opportunity to honor them, but also to tell their stories and inspire students today and long into the future.”

Ender Hall will be used for student-focused groups, including Experiential Learning and the Honors Program, Student Employment Services and space for Student Life clubs and organizations. The college previously used the building for temporary office space.  Renovations cost $3.4 million.

Ender was GRCC’s ninth president, serving from 2009 until 2017, when he was named president emeritus.  He is credited with navigating GRCC from a tenuous financial position to one of sustainable strength.

Ender focused on providing opportunities for students and helping them overcome obstacles to success. The GRCC Foundation under his direction was able to award more than $1 million in scholarships. His leadership led to more than 90 transfer agreements with colleges and universities, more than $55 million in grants to support teaching and learning and $21 million in funding for capital projects.

Ender told trustees he was moved to tears as he first told his wife, Karen, about the honor.

“That was about, in retrospect, a huge sense of gratitude and humility. But also, and today, I’m thinking a lot about my Mom and Dad,” he said. “GRCC was the capstone of my career. I’m proud of what we accomplished, and prouder yet about the leadership that is in place.”

Trustee Kenyatta Brame said the new name will be a reminder of Ender’s dedication and impact.

“Long after we are all gone, that building will be there with your name, and it will be existing, just like your legacy at this college,” Brame said. “Thank you for all you’ve done. You know the impact you had, and students today are still feeling that impact.”

The former Lettinga House was used as temporary office space and housed the Institutional Research Department and General Counsel. It received $1.8 million in renovations.

As Custer Alumni House, it will be the home of the Grand Rapids Community College Foundation and host alumni activities.

Custer, CEO and founder of Custer, Inc., earned two national awards in six months for his service to GRCC and its students.  He was a first-generation student at what was then Grand Rapids Junior College in 1965.

Custer became a member of the foundation’s board of directors in 1989 and immediately joined efforts that led Kent County voters to redistrict GRJC into the independent, standalone Grand Rapids Community College.

In 2008, he was named board chair -- the first time this leadership position was held by someone other than the college president. He has served as chair of the fundraising committee for 30 years and most recently as co-chair of GRCC’s successful A Broader Vision capital campaign.

The Council for Advancement and Support of Education last month named Custer the recipient of the 2020 Ernest T. Steward Award for Alumni Volunteer Involvement. The American Association of Community Colleges in December named Custer one of just four 2020 Outstanding Alumni Award recipients from among 600 nominations.

Mullins said Custer frequently tells people in Grand Rapids – and beyond – that this community would not be the community it is without GRCC here.

Trustees board Chairperson David Koetje said Custer is an example of how an “ordinary people can do really extraordinary things.”

“He started a business, and through that business became a philanthropist and never lost sight of his love for the institution that helped shape who he is today,” he said.