Dr. Bill Pink became Grand Rapids Community College’s 10th president in May 2017, and is the first African-American appointed to the post in the 100-plus years of the institution.

With more than 25 years as an educator and leader at the national and local level, Dr. Pink is focused on building on GRCC’s strong history of service to all students, guiding the college to be relevant and responsive to its community.

The Abilene, Texas, native has taught and coached in Oklahoma, Nebraska, and Oregon. He was a successful college basketball player, earning awards for his athletic and academic achievements, including a 2016 induction into the York College Athletic Hall of Fame.

He is also involved in governance and policy development at regional and national levels, and was elected to the board of trustees for the Higher Learning Commission, the regional accreditor for colleges and universities across 19 states. He serves on the Community College Advisory Panel for The College Board and has also been appointed to the executive committee of the Michigan Economic Development Corporation by Gov. Gretchen Whitmer.

He was recently elected to the American Council on Education board, working with leaders from across the nation to shape public policy and help more students gain a quality education.

Dr. Pink completed a four-year appointment as a member of the National Selection Committee for the National Merit Scholarship Council in January 2016. He is also a former national conference co-chair for Dream Deferred: The Future of African-American Education.

In West Michigan, Dr. Pink serves in leadership posts for a variety of workforce and community organizations. He is a the vice chairman of the United Way, Heart of West Michigan; board member of the Spectrum Health West Michigan, West Michigan Works!, The Right Place, and the Grand Rapids Economic Club.

He was named 2019 Newsmaker of the Year for education by the Grand Rapids Business Journal, and the 2019 Pacesetter, an award for community college presidents from the National Council for Marketing and Public Relations.

Dr. Pink speaks at events across the country, often focused on diversity, leadership, career and workforce development, and faith-based presentations. He also teaches public speaking courses as well as athletic administration courses at the undergraduate and graduate levels.

He enjoys golfing, fishing, and spending time with his family. His wife, Lori, is a Michigan native and is retired from the U.S. Air Force Reserve. Their son, Lance, is a member of the U.S. Marine Corps and is married to Kayla, and their daughter, Lydia, is a GRCC student. 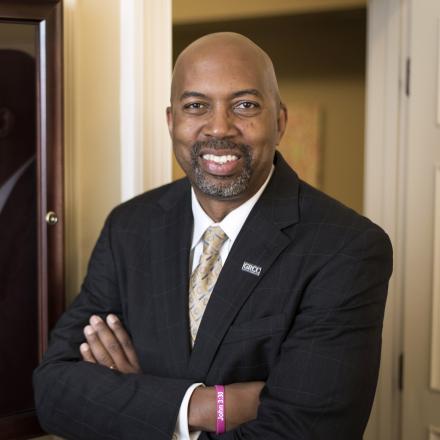