“I have nothing in common with these kids.”

Javier Jimenez was certain of this as he sat in a math class at GRCC.

Most of them seemed younger than him, and he was sure that they didn’t come from the same background.

Jimenez enrolled at GRCC because he knew that he needed an education if he was going to persuade potential employers to look beyond his criminal record. He got involved with drugs as a fifth-grader and had joined a gang by age 13. He had survived overdosing on ecstasy and cocaine, arrests and self-destructive behavior.

“By the time I was 18, I was basically a career criminal,” Jimenez said. “Throughout my adult life, I struggled with drug addiction, paranoia, gang violence, depression, anxiety and legal issues.”

At age 24, he decided that he needed to change: “I came to GRCC because as a felon, I realized that without an education, I was going to struggle to build a better future for myself. My goals were to basically pass my classes and get into a job where my background wouldn’t hinder my success.”

But Jimenez’s college career got off to a rough start.

“I was studying and still getting Cs in math,” he said. “It was frustrating and discouraging. I remember sitting in class and thinking about how I had nothing in common with the kids surrounding me. I felt so out of place, I started second-guessing my decision to stay in school.”

He had a heart-to-heart talk with Dr. Andre Fields, associate professor and counselor.

“He told me that I didn’t have a choice but to succeed in school — and to reach out for help if I needed it,” Jimenez said.

In classes where he struggled, Jimenez persuaded fellow students to form study groups, which he often hosted in his home. They formed a plan to review material and didn’t move on until everyone was comfortable with the information. He also took advantage of the tutoring GRCC offers.

“I never liked going for tutoring because since I was a kid, I felt it was only for unintelligent people,” he said. “But by the second semester, I was taking full advantage of tutors in the English and math labs. Getting tutored doesn’t mean you’re stupid. The stupid thing is to struggle and not ask for help or give up.”

And it turns out that Jimenez did have things in common with his classmates. He joined GRCC’s Honors Program, the Phi Theta Kappa honor society and the Alpha Beta Omega leadership development program. The events he attended through ABO connected him to the bigger community.

“I was surprised when I started getting straight As and became part of the Honors Program,” he said. “Classes that I used to struggle with had become my favorites. I developed skills that allowed me to help others.”

Jimenez said he’s channeled that determination into other parts of his life: “I think out of all my new qualities, my ability to stay positive and work hard to meet my goals are the things I like best about the new me. I have taken on a new identity as a hard worker and a good student. I left behind that gangster identity that I held onto for so long.”

He’s been surprised by the support he’s received at GRCC, including a scholarship through the GRCC Foundation.

“Receiving a scholarship has been a tremendous help,” he said. “While going to school, I can’t work as many hours as I normally would, so I’m more often living paycheck to paycheck and usually stressing as to how I’m going to make it through the week. It also motivates me to know that I have people rooting for me enough to invest in my education, even though they aren’t directly benefiting from it.”

Jimenez works as an automation and mold technician at Swoboda Inc. He’s in a mechatronics program through his job that counts toward the bachelor’s degree in engineering that he wants to pursue at Ferris State University. Eventually, he would like to work for the aerospace or energy industries.

“GRCC gave me a boost of confidence and showed me I could do anything I set my mind to,” Jimenez said. “My student experience at GRCC has definitely helped me grow as a man.” 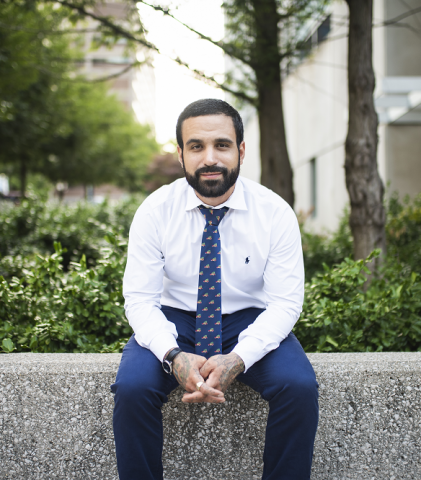 “GRCC gave me a boost of confidence and showed me I could do anything I set my mind to. My student experience at GRCC has definitely helped me grow as a man.”