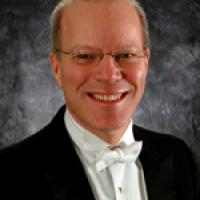 Since 2004 Kenneth Bos has been a member of the music faculty at Grand Rapids Community College where he serves as the full-time Music Department accompanist along with teaching applied piano and organ and piano techniques classes. He is the regular accompanist for the Calvin College Alumni Choir and the Organ Fellow for the Grand Rapids Choir of Men and Boys. Dr. Bos serves as organist and Director of Music at Calvin Christian Reformed Church in Grand Rapids. He accompanies for the West Michigan Opera Project and occasionally for Opera Grand Rapids and the Grand Rapids Symphony Chorus.

Dr. Bos is well-known as a pianist, organist, and accompanist in western Michigan. His career as a professional accompanist has included performances in Europe, the Orient, and the British Virgin Islands as well as throughout the United States. Recent performances include concerts with the Baroque on Beaver Festival (Beaver Island, Michigan), the Michigan Music Conference (Grand Rapids), the Michigan Youth Arts Festival (Kalamazoo), and the Nicholas Loren Vocal Competition (Holland). Dr. Bos has also performed in the Gilmore International Keyboard Festival and the Fontana Chamber Arts Summer Series.

Dr. Bos previously taught at Grace Bible College, Calvin College, Kuyper College, and Northwestern College. He has degrees from Calvin College and the University of Michigan, and he holds a doctorate in piano performance from Michigan State University. Ken and his wife, Fay, have three wonderful daughters, three pretty good sons-in-law, and the five most adorable grandchildren in the world, Kate, Joshua, Nate, Lydia, and Jack.