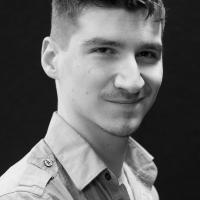 Jason James Flannery is a Grand Rapids area theatre artist, and an Adjunct Professor of Acting, Directing, and Improvisation at Grand Rapids Community College, Aquinas College, and Grand Valley State University. He is an alumnus of Kellogg Community College, Grand Valley State University, and Lindenwood University; where he received his MFA in directing in 2017. Since returning to Grand Rapids, he has directed several academic productions, as well as the Gerald R. Ford Presidential Foundation's touring production of Victors of Character. He also works with Actors' Theatre Grand Rapids as an actor (The Whale, The Curious Incident of the Dog in the Night-time, At the Table, Sweat), scenic artist (The Burnt Part Boys), and social media coordinator.