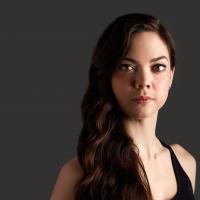 Kara began her performing career with Grand Rapids Ballet Company right here in Michigan. While studying with the company, she danced in many professional productions and performed on tour in Italy and Croatia. After graduating Summa Cum Laude from Aquinas College with a double degree in English and Biology, Kara began her professional dance career with Cleveland’s Verb Ballets Contemporary Dance Company, where she performed many original pieces and masterworks, including Martha Graham’s Appalachian Spring, Doris Humphrey’s The Shakers, Alwin Nikolais’s Noumenon Mobilus, Shapiro and Smith’s To Have and to Hold, Ian Horvath’s Laura’s Women, and the title role in Richard Dickinson’s Carmen, among many others. Kara danced for five seasons with Verb, performing throughout Northeast Ohio and touring nationally. While in Cleveland, Kara’s choreography was professionally produced by Verb Ballets and commissioned by local studios for national competitions.

In 2015, Kara moved to Shanghai, China, where she danced with SLATE Contemporary Dance Company and performed in diverse venues throughout Shanghai and Suzhou. While in China, Kara taught workshops and master classes in contemporary dance and ballet technique. In 2017, Kara returned to the U.S. in order to pursue her M.F.A. in dance at the University of Arizona, where she taught undergraduate courses in modern, ballet, jazz and dance improvisation. While at UA, Kara performed in Masterworks by Martha Graham and Nacho Duato. Her choreography was also selected to be produced on stage at the Stevie Eller Dance Theatre. In 2018, Kara was invited to present her research on the effect of dance in popular culture on dance education at the National Dance Education Organization’s national conference. Kara is primarily interested in using dance as a platform to make statements about social, economic and political justice and as a way to spread understanding and acceptance and bring disparate populations together.   For her thesis project, Kara presented a full-length contemporary dance work that explored the perspectives and experiences of individuals, families and communities affected by Alzheimer’s Disease, which included audio from interviews conducted with local patients and their care partners.  Kara is also a certified Vinyasa Yoga instructor and Fletcher-style Pilates mat instructor.  Kara is thrilled to be back in her home state of Michigan, teaching as an adjunct professor at Grand Rapids Community College and sharing her experience with various dance and yoga studios around Grand Rapids. Kara also performs regularly with DITA, a local professional dance collective. Kara is excited to have the opportunity to contribute her experience to the vibrant arts community here and continue her efforts to unite people through the arts.