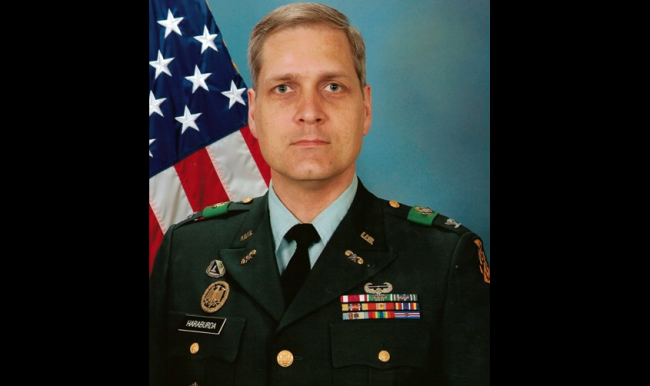 It all started at Grand Rapids Junior College, which Harabruda started attending while still a Creston High School student.

“I came to ‘JC’ because it allowed an opportunity for me as a high school student to take classes before I graduated,” he said, joking that he enjoyed “blowing things up, doing weird things with chemicals.”

Haraburda tutored classmates in science and math, and enlisted in the Army Reserves to pay for classes, earning his associate degree in 1981.

He went on to earn a bachelor's degree in chemistry from Central Michigan University, where he today is a member of the CMU ROTC Hall of Fame.

He then earned a Master of Strategic Studies from the U.S. Army War College -- teaching chemistry classes while there -- and master's and doctoral degrees in chemical engineering from Michigan State University.

He served in the Army from 1981 through 2010, including a 2007 deployment to Kuwait to correct logistics problems in the war zone. He was awarded the Legion of Merit and the Meritorious Service Medal.

Haraburda is an inventor, making key contributions to the development of heat exchangers and spacecraft propulsion. He holds two U.S. patents and has seven patent requests pending. In 2013, the National Society of Professional Engineers named Haraburda a Fellow, and he served as president of the Indiana Society of Professional Engineers from 2014-15.

“I can attest that Grand Rapids Community College gave me a strong foundation of knowledge, which helped me through everything I’d done,” he said after being named GRCC Distinguished Alumni in 2017.

“The teachers here instilled a sense of community pride. I saw that from the teachers and the staff when I was a student here and I took that to heart.”