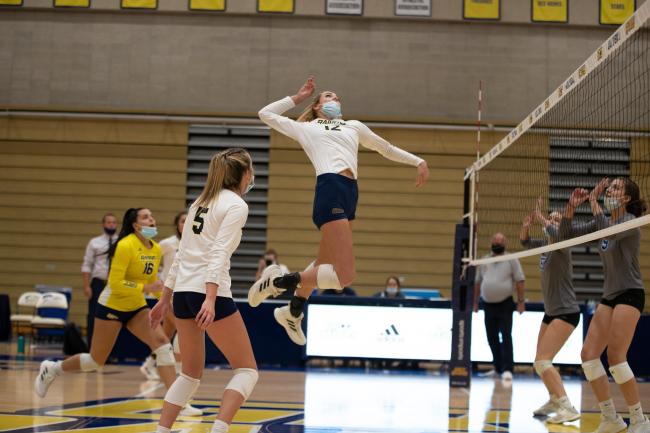 After a dominating first set in which the Raiders hit a match-high .457 with 18 kills against just two errors, the Bruins fought back to win set two, holding GRCC to a match-low .114 hitting percentage. Sets three and four were never in doubt for the Raiders, who would defeat Kellogg for the 27th straight time, dating back to 2007.

"I think the team played really well," said Holesinger, a freshman from Rockford. "We had some downs but in the end we showed people what Raider volleyball is all about. It felt really good to get back into the swing of things offensively and the entire team stepped up after losing the second set."

Setter Shannon Russell, from Grand Rapids, posted a double-double with a career-high 45 assists and 10 digs, running the 5-1 offense all four sets. She also had a career-high 5 kills and had a team-best four aces.

Ola Nowak, playing libero in all four sets for the first time posted a career high 20 digs. The Grandville resident also had seven assists and was a perfect 19-for-19 in serve receive.

Charlotte's High School volleyball team came out to watch their former player Rylee VanPatten rack up a season-best 13 digs and she was also 19-for-19 in serve receive.

Conference play continues for the Raiders on Sept. 20, as the team travels to Muskegon Community College in a makeup match. The match will be live streamed for fans who can't be in attendance on Muskegon CC TV.