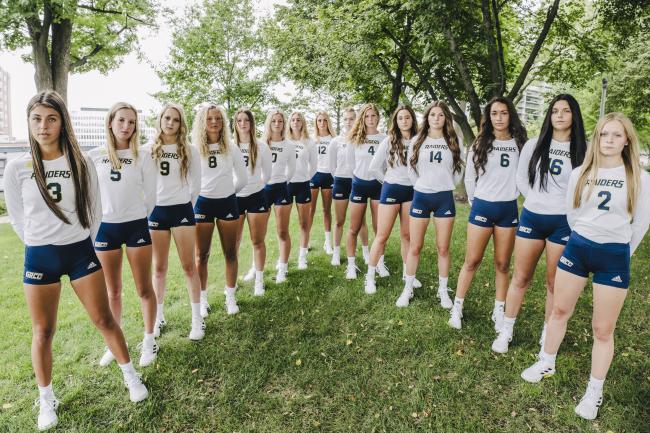 Aug. 27, 2021, PERRYSBURG, Ohio -- The Grand Rapids Community College volleyball team defeated both of its opponents Friday on the first day of the Owens Express Invitational Tournament to improve to 3-3 on the season.

GRCC jumped out to a 6-2 lead in the opening set of its first match and never looked back. The team led by as many as seven points and downed the Red Hawks 25-21. Annie Holesinger of Rockford tallied five of her match-high 18 kills in the set.

Catawba Valley tied up the match at a set apiece after a 25-17 second set victory, but the Raiders would rebound to win 25-21 in each of the final two sets to take the match.

Holesinger -- named MCCAA Western Conference Player of the Week last week -- would lead all point-scorers with 21 points on 18 kills and three blocks. Freshmen Audrey Torres of Caledonia and Morgan Fugate of Wayland had 10 kills apiece and combined for 19 kills.  Audrey Gower of Dimondale and setter Ola Nowak from Grandville led the defense with 19 digs each.

GRCC took on Waubonsee Community College of Sugar Grove, Ill. in the second match. After a season-best .636 hitting percentage, the Raiders downed the Chiefs in the first set, 25-16. Holesinger and Fugate each had five kills in the set. The Raiders would lead wire to wire in the next two sets and win 25-18 and 25-15 to complete the sweep.

Holesinger hit .750 for the match and tied a match high of nine kills. Fugate also had nine kills to go along with her team high four aces and nine digs. Gower led the defense again with 11 digs while Alena Visnovsky of Sparta, Mich. and Karissa Ferry of Chesaning finished with three blocks a piece.

The Raiders will conclude tournament play Saturday against the No. 2 ranked Cobras of Parkland College and Terra State Community College of Ohio, which finished ninth in the nation last year. Game play is scheduled to begin at 11:45 a.m.