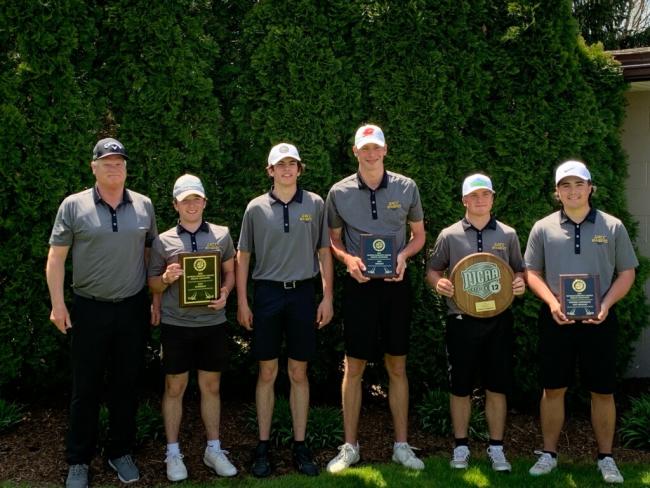 May 10, 2022, ST. CLAIR, Mich. – Arie Jackman bested all competitors and Sam Foss sank his first collegiate hole-in-one to drive the Grand Rapids Community College golf team to the national championship tournament for the fifth season in a row.

GRCC finished in second place at the MCCAA/Region XII Championship on Tuesday, and is now headed to the NJCAA DII National Championships in Joplin, Mo. starting on May 17.

“The Raiders once again proved that hard work pays off,” coach John Forton said. “The team is on its way to its fifth straight appearance in the NJCAA National Championship. I can’t be more proud of the team’s effort this year.”

Jackman led the field of 40 golfers after shooting a plus-two over the first two rounds on Monday and finished eight strokes over par, seven shots better than the runner-up from Oakland Community College.

GRCC saved its best round for last, shooting a 316 on Tuesday, which moved the team up from third place on day one to second place overall, five strokes ahead of Muskegon Community College.

Oakland won both championships, finishing 13 strokes better than the GRCC.

Matthew Denhartigh finished in fourth place overall and shot a 234 while teammate Conner Oman came in at 10th overall with a score of 243.

Foss, a freshman who had his first collegiate hole-in-one on Monday, finished in 20th place, shooting a 260.

GRCC totaled 18 birdies in the tournament, led by Jackman with seven. Denhartigh had five, Oman three, Foss two and VandenHout had one.