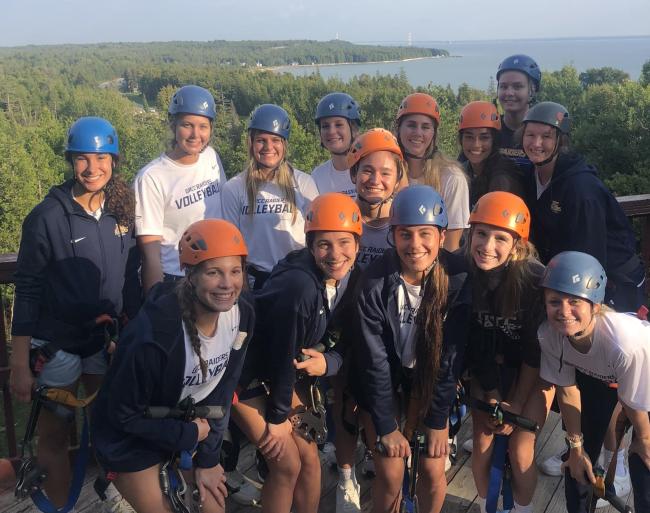 "Today we came together as a team and played what we like to call, Raider volleyball," said Ferry, who finished with 14 kills and four blocks. "We kept our energy high during both games and had a lot of fun."

Torres led the team with 16 kills while adding 21 digs over the two-match sweep.

Other team leaders included Gower with 23 digs, Shannon Russell with 35 assists and six aces, and Alena Visnovsky with 14 blocks, including four solos in the second match.

GRCC, the pre-season pick to finish first in the new Northern Conference, wrap up its northern trip against Delta College on Tuesday in a single match starting at 4:30 p.m.

The GRCC golf team also was in action on Monday, kicking off its fall season with a third-place finish at the Mott Community College Invitational in Flint.

This year's team has 10 men, allowing coach John Forton to send two teams to the course.

Forton was proud of his players, but noted that they have work to do, especially after a dominating performance by the home Mott squad that ran away with the crown with a 20-stroke victory.

Freshmen Mason Anderson and Drew Harrington led the Raiders with scores of 76, while sophomores Connor Oman shot a 78 and Sam Foss a 79.

The golf team is back in action on Wednesday, playing in the Aquinas College Invitational at LE Kaufman Golf Course in Grand Rapids.