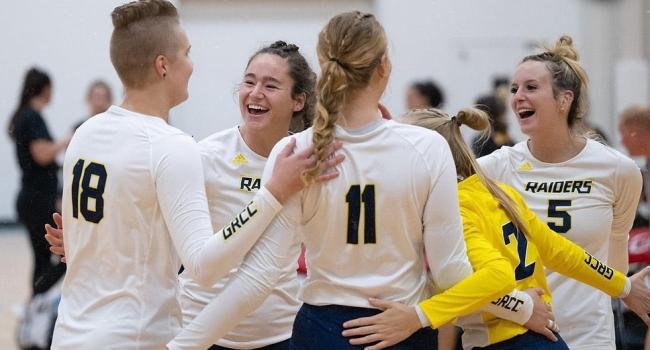 "Overall, I think this trip was a super great experience for all of us," said Torres, who hit a career-high .438 during the last match. "We had so much success throughout the five days with not dropping a single set and finding ways to keep grinding even when we were all mentally and physically exhausted. Everyone was able to get some playing time and it was awesome seeing everyone show up and prove themselves. This last game was such a great way to wrap up the trip as we left it all out there on the court and had fun doing it."

Torres' finished with a match-high 16 kills with just two hitting errors while adding an ace, four digs and two blocks.

Gower, who just picked up her 600th career dig on Monday, added a match-high 21 digs, which was also a career best in just three sets. She also tied for the team lead in service aces with two.

As a team GRCC played extremely well in all aspects of the game and they had to, playing a solid Delta team that was coming off two straight wins.

The team had just two service errors and four reception errors, while picking up ten blocks and averaging 13 kills per set.

GRCC, the pre-season pick to finish first in the new Northern Conference, won't play again until Sept. 29 as the team travels to take on rival Muskegon Community College.