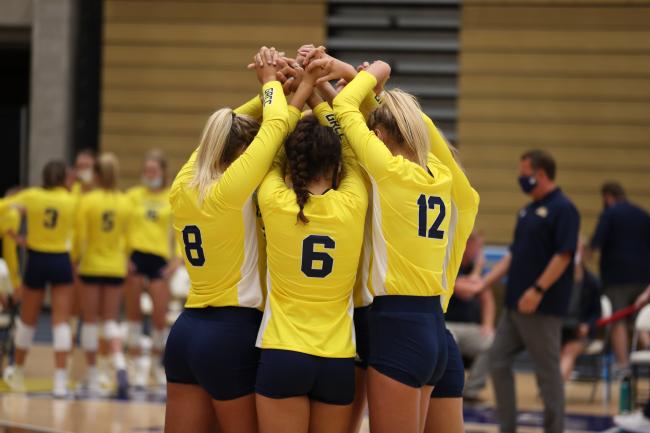 Sept. 14, 2021, PLYMOUTH, Ind. – Audrey Torres had a match-high 10 kills and .421 hitting percentage to lead the Grand Rapids Community College volleyball team to a 3-0 sweep over Ancilla College on Tuesday.

"It was a great team victory tonight," head coach Chip Will said. "Everyone on the team contributed in one way or another and when their name was called, they came in and delivered. It helps that so many players can play multiple positions."

That versatility showed as the Raiders used three liberos on the night, including Ola Nowak's first appearance in the position during the third set.

Kylie Oberlin, of Fruitport, knocked in five of her six kills in the third set where the Raiders hit a match-high .444.  Oberlin hit .400 for the match and added three blocks.

Serving played a big part of the Raiders win, as they had a season-high 13 aces, led by freshman Shannon Russell, who had five. Six different Raiders tallied at least one ace, while 10 different players had at least one dig.

Conference play continues for the Raiders on Sept. 16 as the team hosts Kellogg Community College. The match will be live streamed for fans that can't be in attendance on GRCC Athletics YouTube channel.