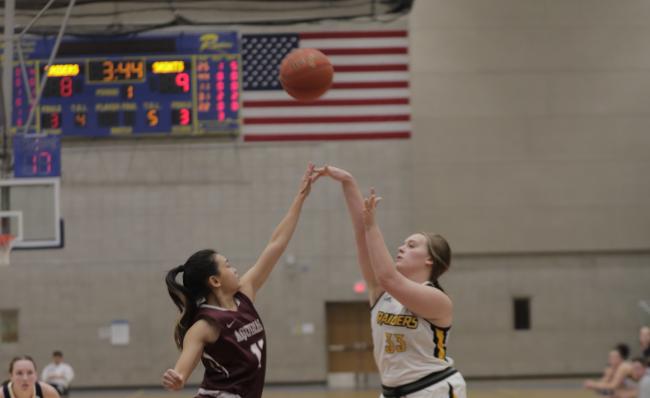 In the women's game, sophomore Allison Kellogg had a career night, with 19 points on an efficient 8-of-12 from the field and added a career-high five steals, helping GRCC to a 72-48 victory. The team improves to 8-5 overall and 2-1 in conference play.

The Raiders led wire-to-wire and led in every statistical category. The team turned the ball over just 10 times and had 15 steals and seven blocks.

Grace Lodes had a career-high nine assists and Karissa Ferry added a season-best eight points including 4-for-4 from the free throw line.

Sally Merrill was 7-of-11 from the field and 5-of-5 from the charity stripe while adding a team-best seven rebounds.

The men's team also led the entire game in its convincing 106-65 win, snapping a four-game losing streak after starting the season 11-0.

GRCC only led by eight points at the half, but erupted for a season-high 61 points in the second half.

All 10 players scored, including a game-high 23 points on 10-of-12 shooting from Bashir Neely.

The Raiders bench out-scored the starters 57-49.

"Great to get back in the win column after a tough few weeks," head coach Joe Fox said. “Our guys did a great job collectively locking in and executing a game plan. Hard to pick out a certain performance to highlight since everyone played an important role in the victory, but I thought Rico Wade, Bashir and Jordan brought great energy on both ends of the court.  JaJuan and Chris Coleman also made huge plays in the second half for us."

Both teams will be back on the court on Jan. 25, visiting Muskegon Community College  in an MCCAA Northern Conference matchup.