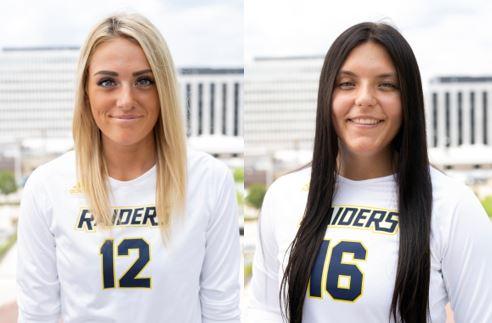 Nowak, a freshman setter/libero from Grandville, was selected after superb performances at the Owens Express Invitational Tournament in Perrysburg, Ohio on Aug. 27 and 28.

Nowak totaled a team-high 94 assists and 52 digs, while chipping in five kills and four aces. Nowak racked up a career-high 19 digs and three blocks while helping her team to victory in the opening match.

"The Raiders faced some of the best teams in the nation during the first tournaments of the season," GRCC Athletic Director Lauren Ferullo said. "Back-to-back Western Conference players of the week awards reflect the hard work from our student-athletes and coaches and outstanding performances against top competition. This is going to be an exciting season."

Nowak follows Annie Holesinger in earning Player of the Week honors. Holesinger, a sophomore from Rockford, was saluted for her performance in the season-opening tournament where she totaled 45 kills, averaged 3.46 kills per set, and had five blocks across the four matches on Aug. 20 and 21. Holesinger tied her career high of 17 kills against No. 3 Iowa Central Community College while hitting .500.

After two tournaments on the road, the Raiders return to GRCC for the team’s first home match of the year at 6:30 p.m. on Thursday, Sept. 2 at the Gerald R. Ford Fieldhouse. The team is facing Glen Oaks Community College.

General admission is $3 per person, and season passes for all games will be available for $50 at the admissions table.  Students and staff are admitted free with their RaiderCard.